For WOEI FM episode #21, we caught up with Darryl Antunez aka Super Darryl, to talk about his early interactions with producing, his multiple pre-spinning rituals, and about his studio at Hip Hop Huis! 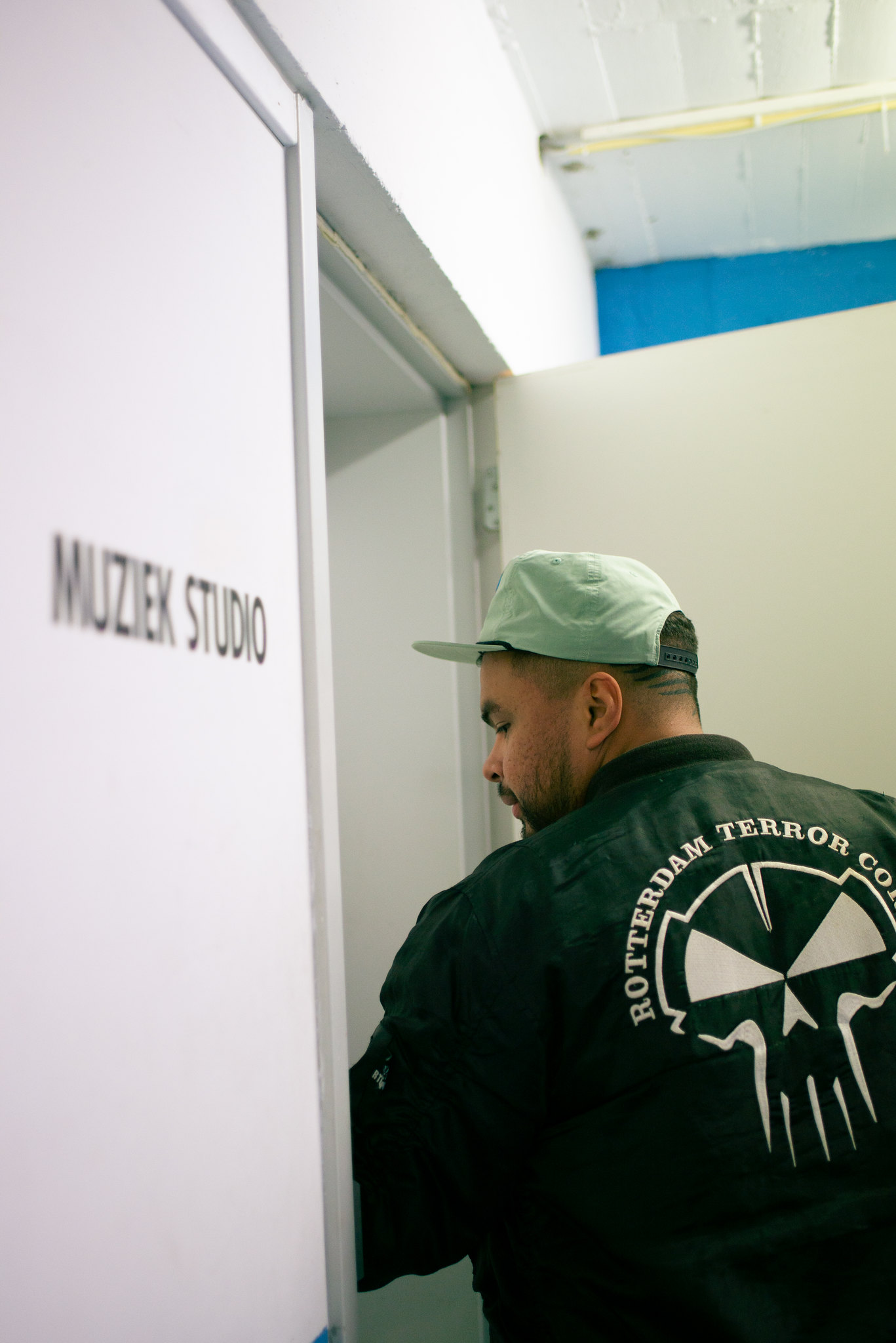 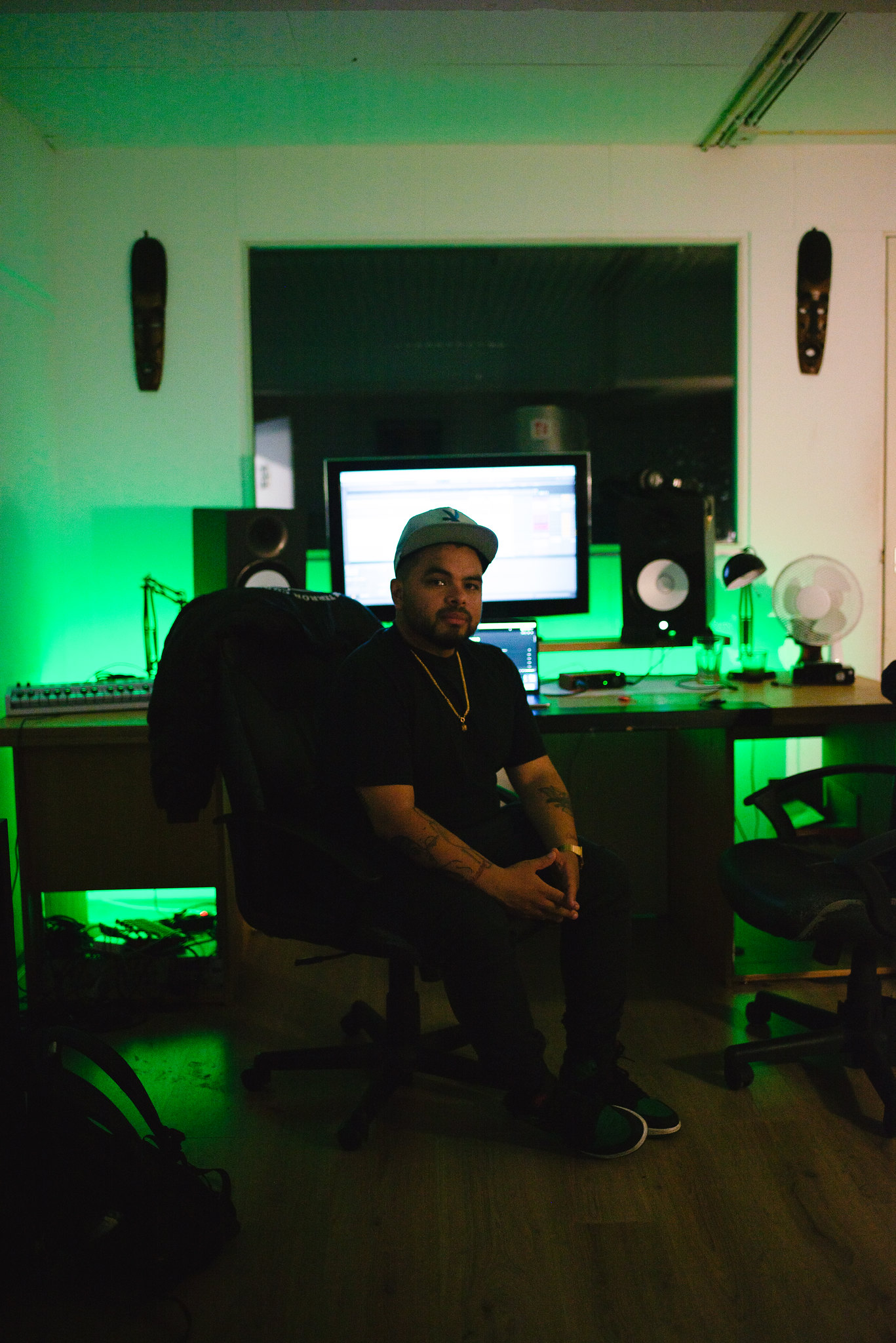 My last name is actually spelled with an 'S', and my father brought my DJ name up, so I thought why not. Now I see it as the 'Z' like Zorro. So now, I can leave a stamp everywhere I've been.

Everything. Everything that I like. From Hip-Hop to Soul, and Garage to House. I spin everything if it suits me. Often, it's House with Hip-Hop elements in it.

When my alarm goes off, I immediately check my phone, which is a bad habit. And now that I'm working from home, I immediately open my laptop, because I still work part-time in Amsterdam. Throughout the day I’m busy checking out new music and clips. And that is not only for the DJ part but also to be up to date.

I also just love to surround myself and engage with creative people. Since Corona I've also started cycling, and I enjoy that, it's a moment to clear my head. We also have a gang called ‘BMC’, which stands for Big Man Cycling. A small movement.

Where are we currently, and what does this spot mean to you?

It means a lot. This place is where more than 80% of everything I do happens. Before it was HipHopHuis, there was a location at Coolhaven, for which I did promotional work at the time. Then the location moved here. I stayed here a lot, where a lot of songs were recorded. It looked very different then, but so many beautiful things have arisen since then. 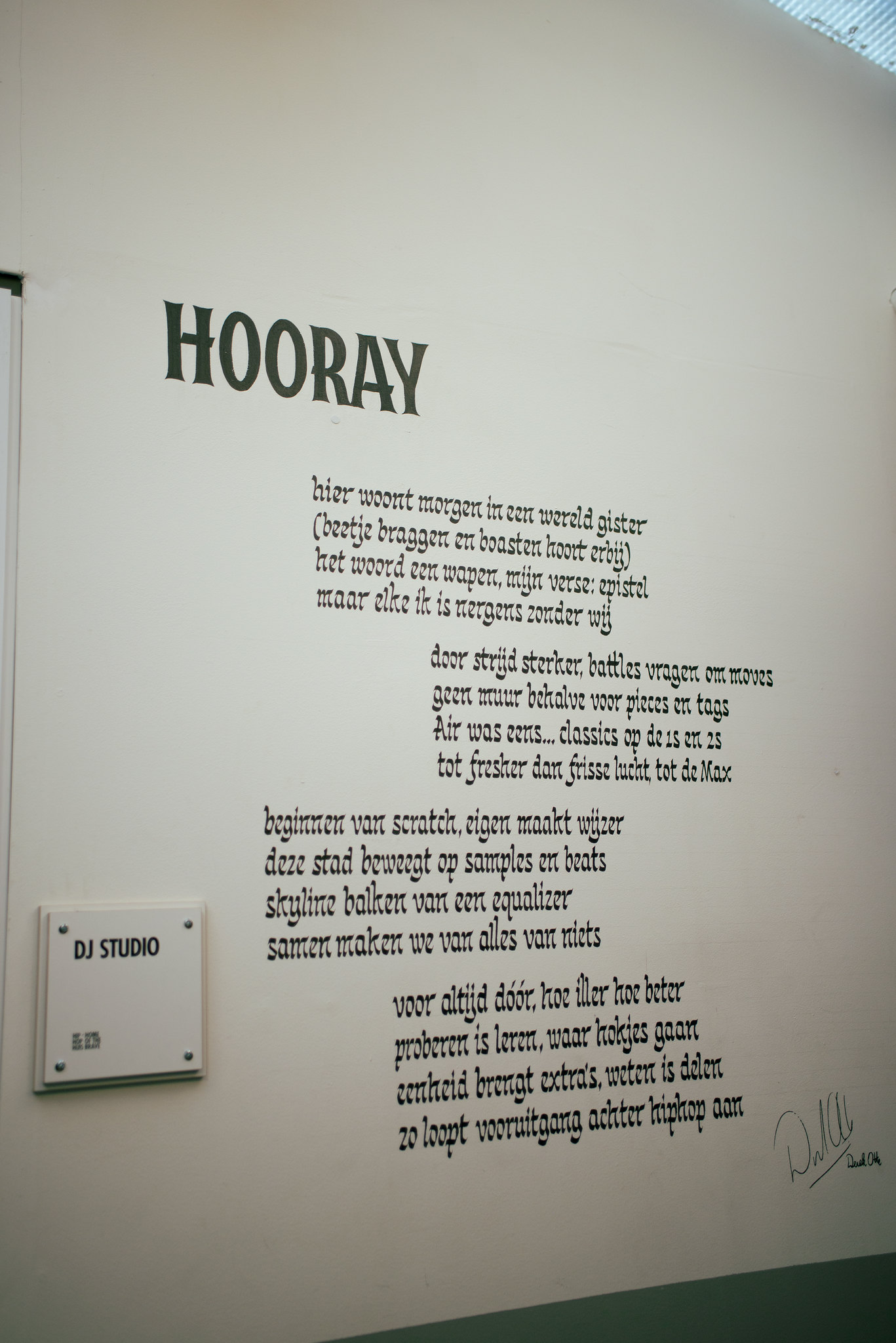 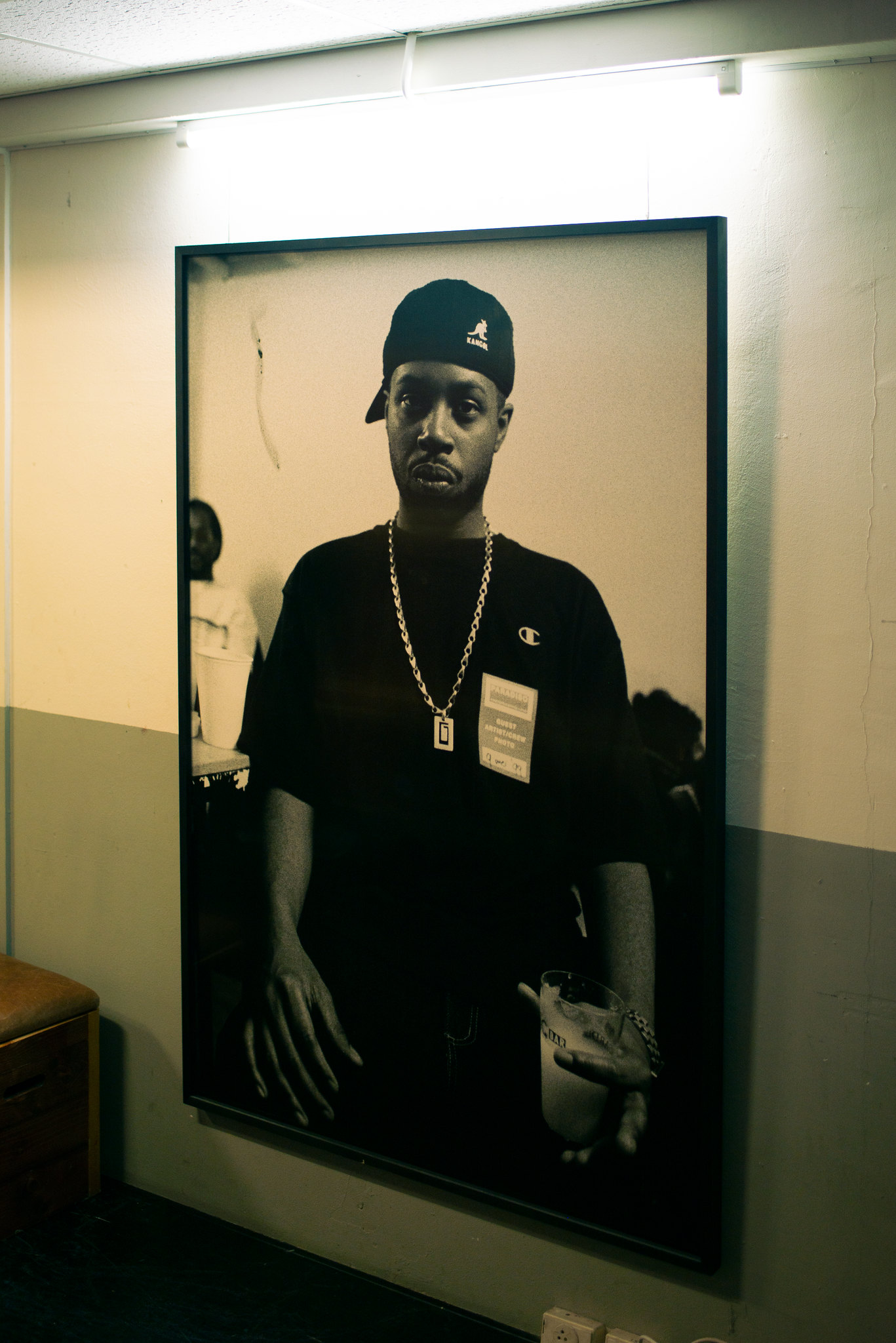 "Since Corona I've also started cycling, and I enjoy that, it's a moment to clear my head. "

I love my city, the rawness. It's nice and sincere. It's multi-cultural, which gives me a lot of affinity with many different people. I grew up in Rotterdam-West, and I still live there today. I wouldn't leave Rotterdam-West at all.

Rotterdammers understand each other. I carry the city with me. From the steps that I take, into my music I make.

Little C, at the water. I spent the whole summer there, chilled and rest. It compliments the neighborhood. I would also really like to live there, so I'm continuing to manifest.

Spikizi Bar is also a place I like to come, it's owned by two friends of mine, I often treat myself there.Before it was rebuilt, West Blaak was also one of those spots. It's been a part of my childhood, I skated a lot there as a child. It gave you a hard mentality as a child.

'Fall and Rise', that's where my mentality comes from.

I don't know any better than music being in my life, that's because my father is also into music. At home, the studio was always with me, so there were lots of recordings, where it was my own choice. Afterwards, I heard that my father was afraid that I would also end up in that world. But I was able to build something myself.

Everything has gone gradually and very naturally. I really enjoy the flow that I'm in now.

From the age of 15, I started to take it seriously. So, in the meantime it's already been for half of my life. 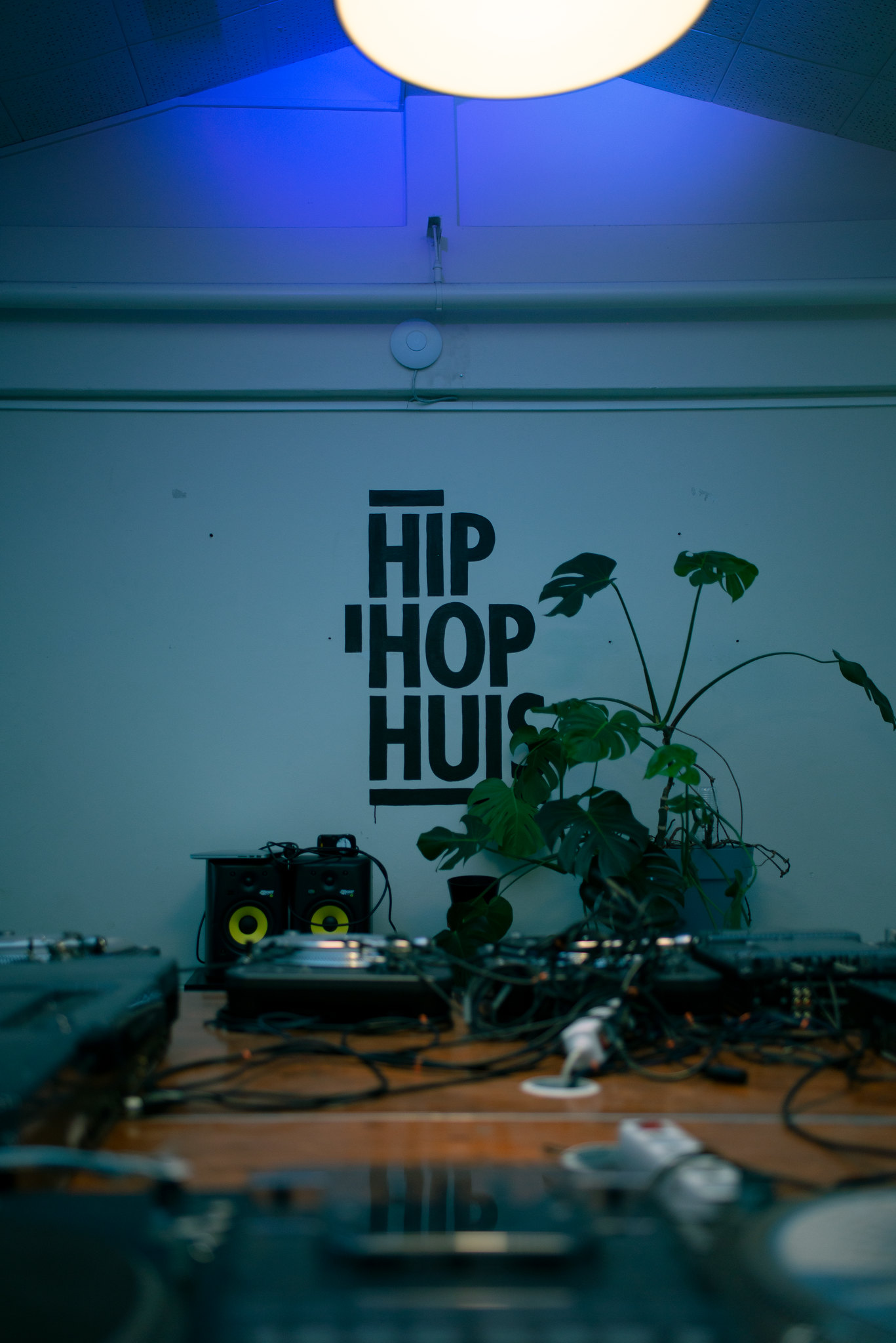 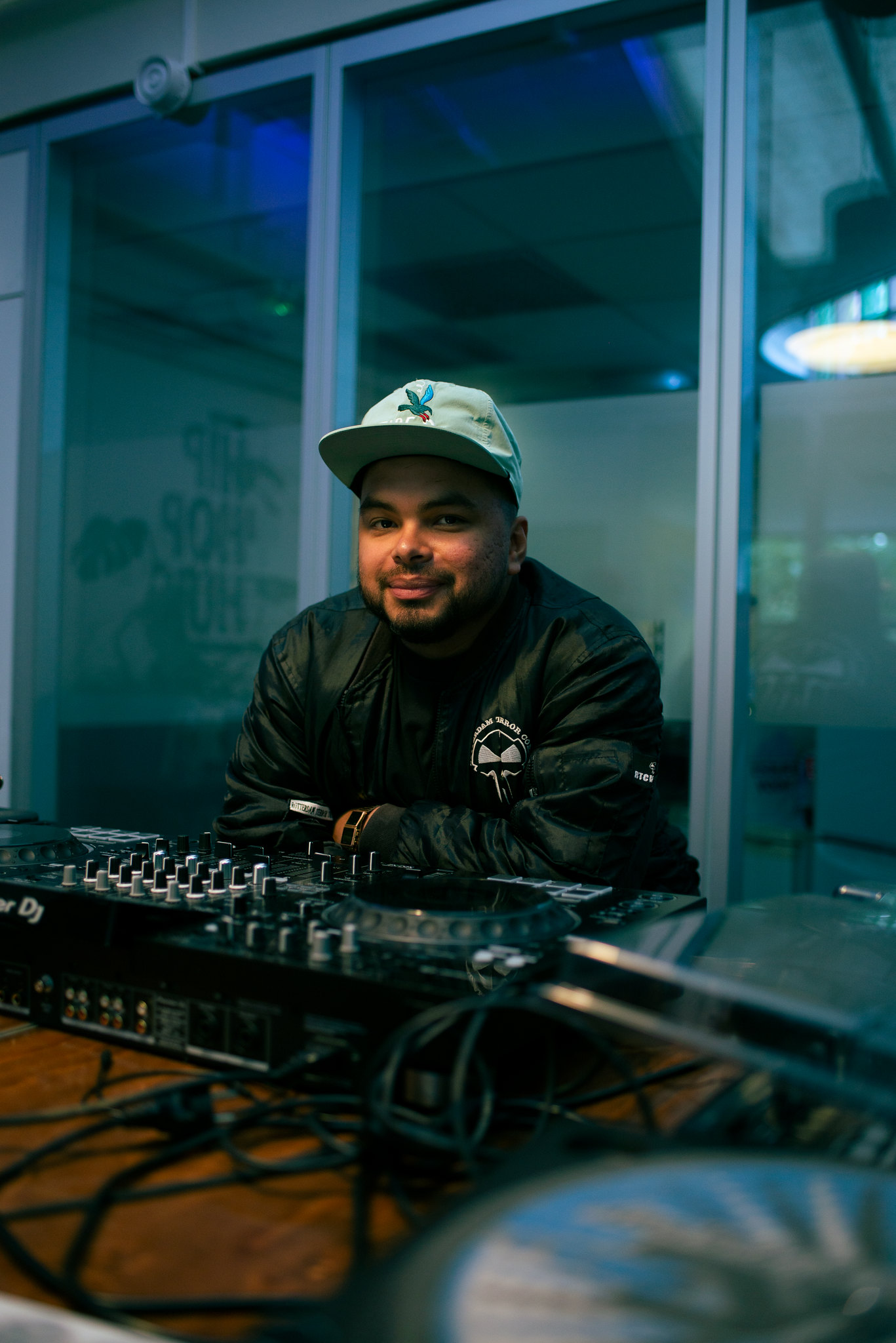 It was at prom, my school had asked me for it. If your school asks you to spin, and you even get paid for it, you instantly say yes.

When I was 18, at Lowlands. That was the second show that I was allowed to do, and that was for a few thousand people. Only afterwards, you actually realize where you stood that day. You know people are standing there, but you don't see them. And it's a lot of energy.

Is there something weird that happened while you were spinning?

I've been through a lot of crazy things. One time, I had to play somewhere after Feis' album release. This was after my birthday. Someone wanted to congratulate me, when suddenly I bump my glass over the mixer. And this was around 1 o'clock in the evening, so I still had the whole day that I was going to need the mixer. During the evening, it broke down more and more.

I have a few. One of them is to stay in bed for a long time and to prepare myself quietly. I'll have a few drinks in advance and before I start, I hug Clee. I also have a crystal from my mother that I always have with me, along with some ransom my father once gave me, that I put in my USB suitcase and never took out again.

And finally, before I start, I put on my hat.

Club nights, and preferably a smaller and intimate one. It's immediately more exciting, because you see the people closer. So, if someone is less comfortable, you can immediately focus on that.

Paris, London, and New York too! I've been to Berlin recently, lots of nice people. 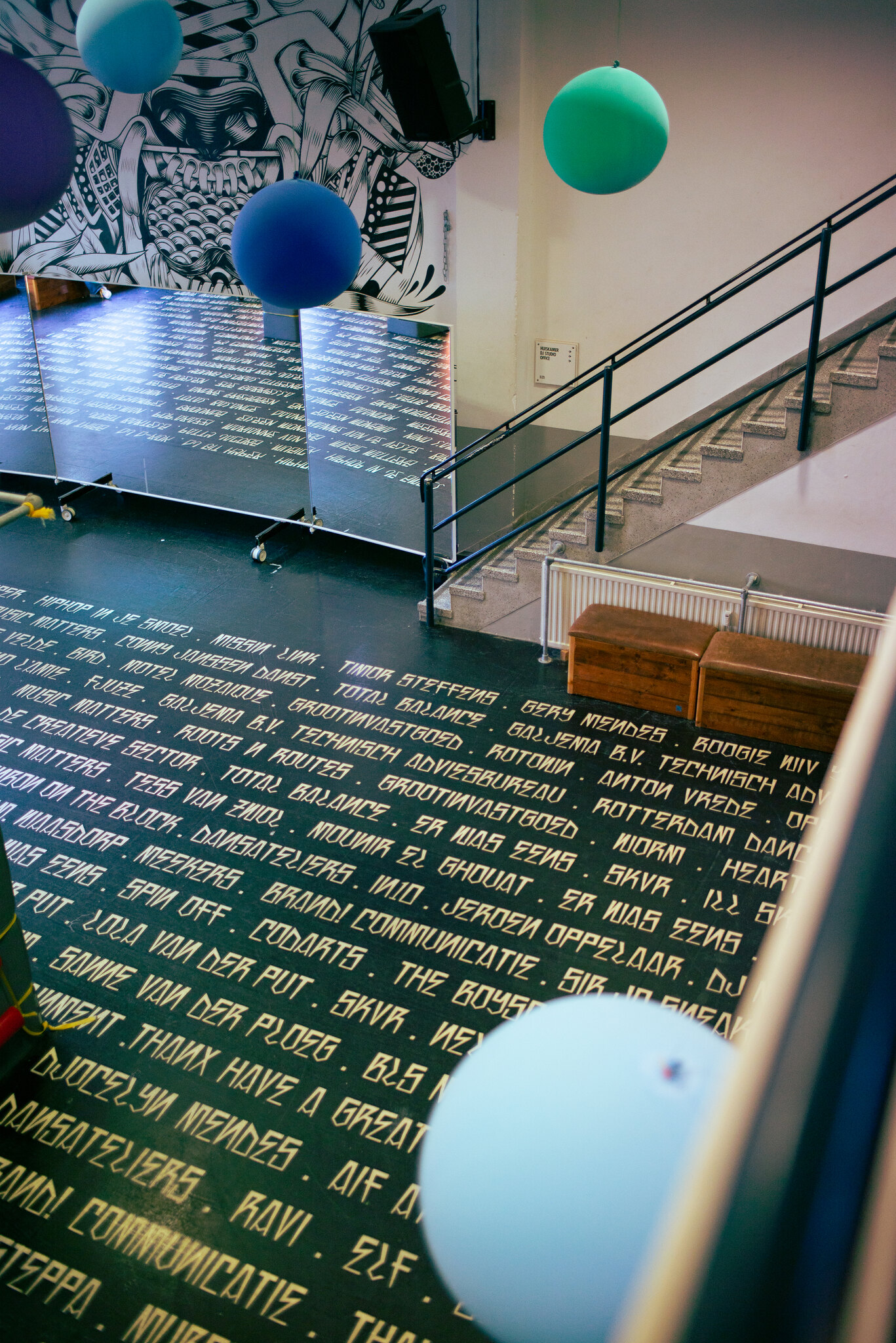 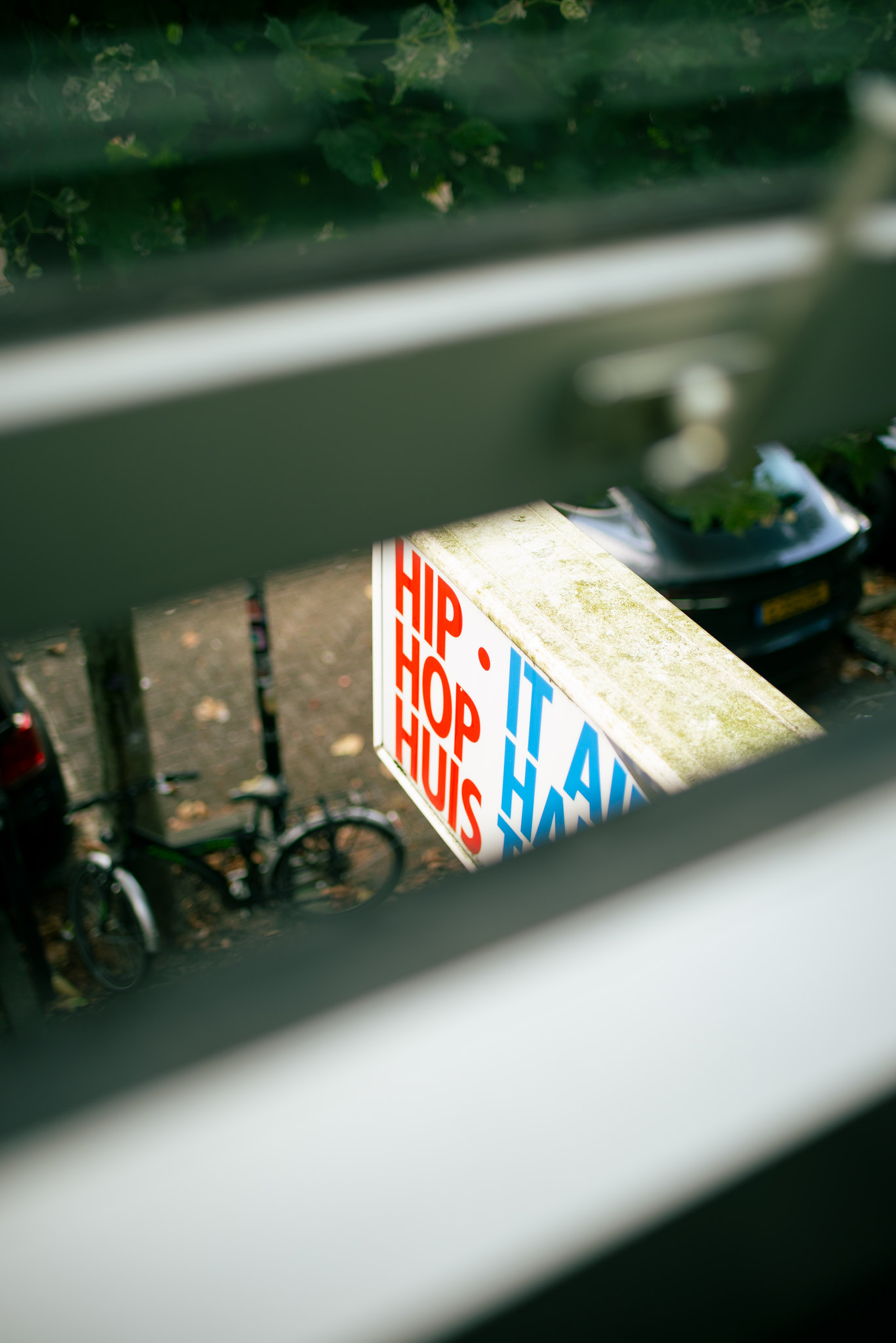 "I also have a crystal from my mother that I always have with me, along with some ransom my father once gave me, that I put in my USB suitcase and never took out again. "

I find myself leaning more towards closing. It's an art to keep all people inside until late. You can do whatever you want. But also, the opening is certainly undervalued. Because you set the tone for the whole evening, that also has its charms.

My schedule is pretty busy. I enjoy it because it's allowed again. And everything is flowing so organically.

Any last words for the audience?

Check ‘Roll The Dice’. It's an open platform right now. We keep it intimate and we'll see where it goes.

We throw that dice and see what number it comes to. 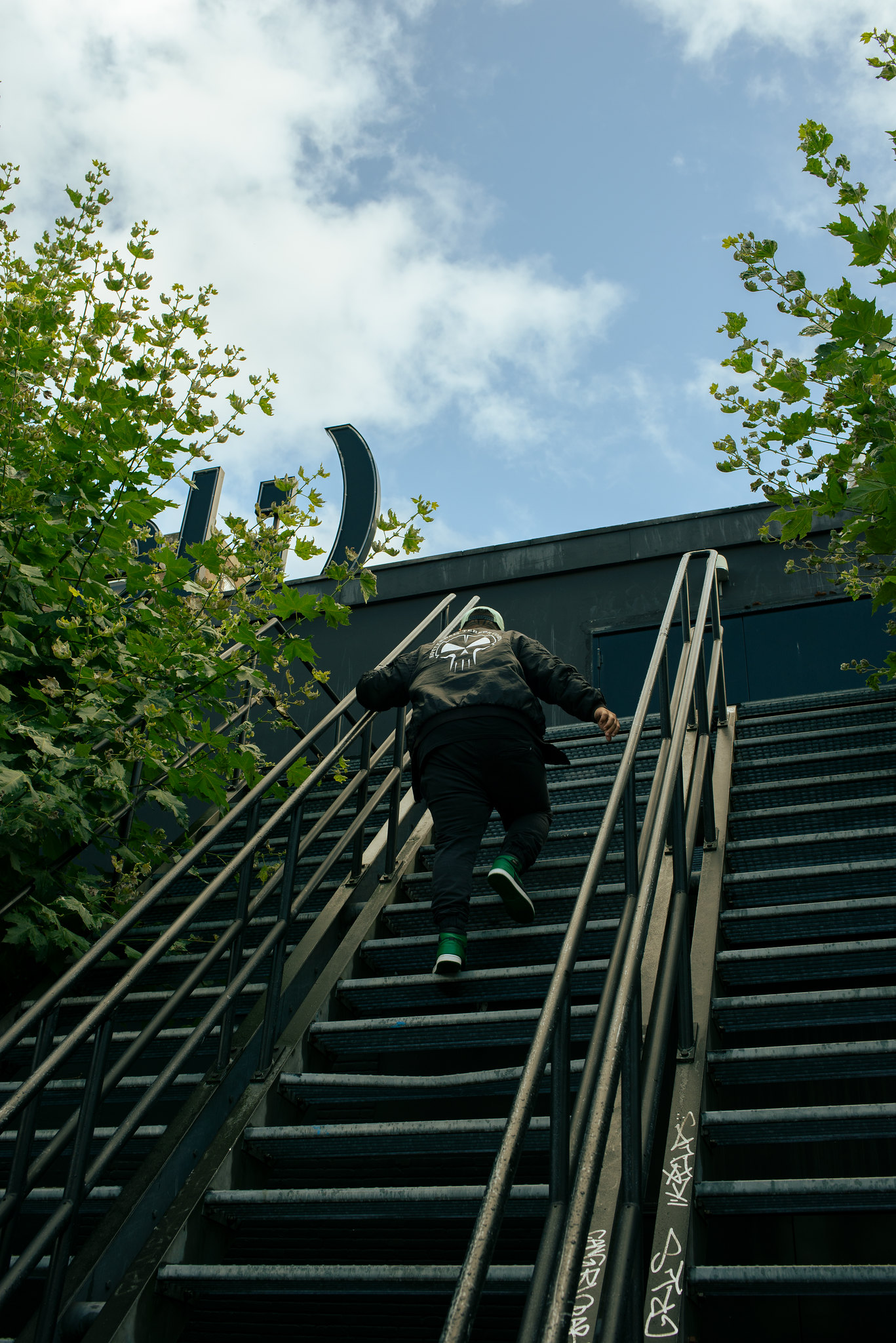 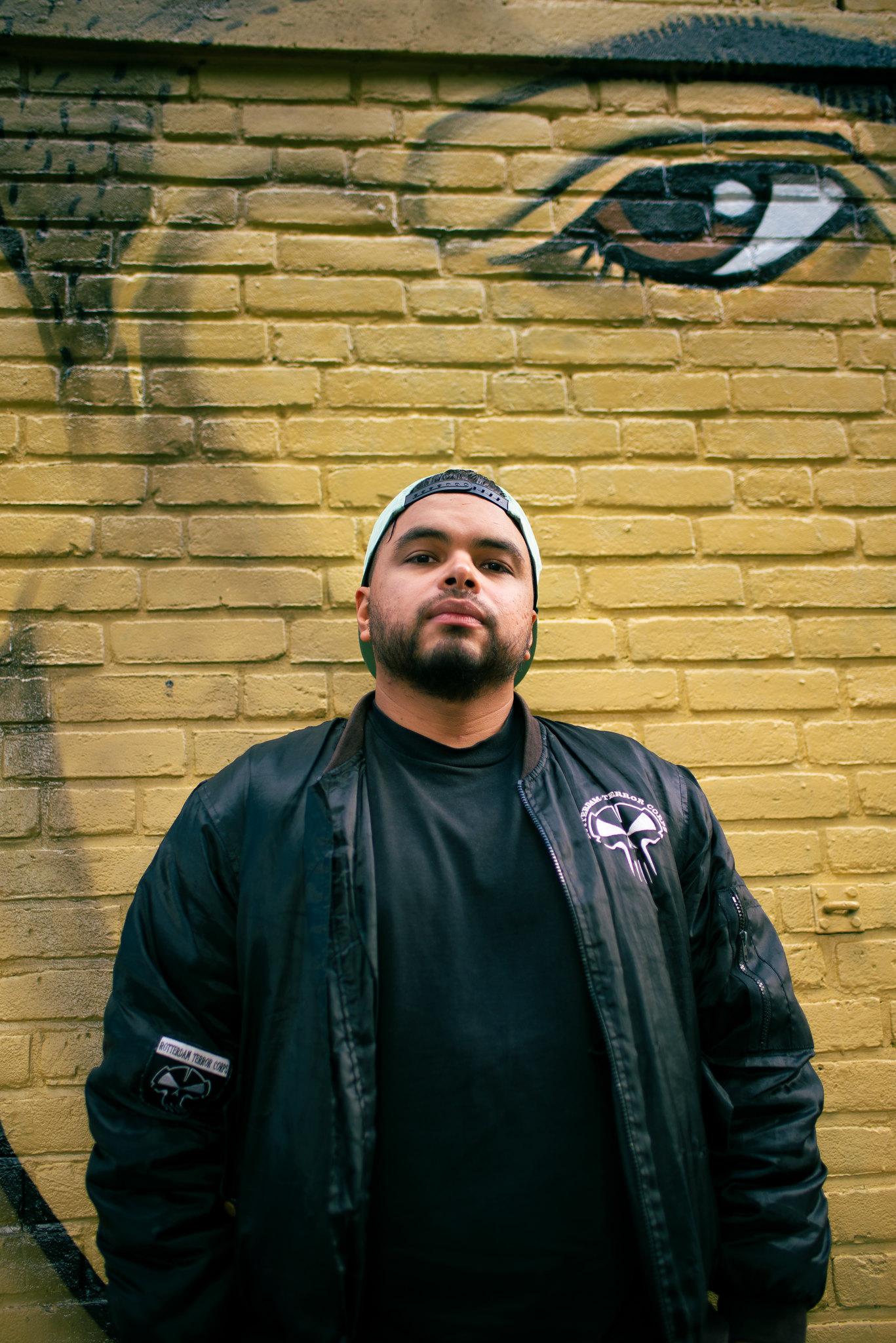 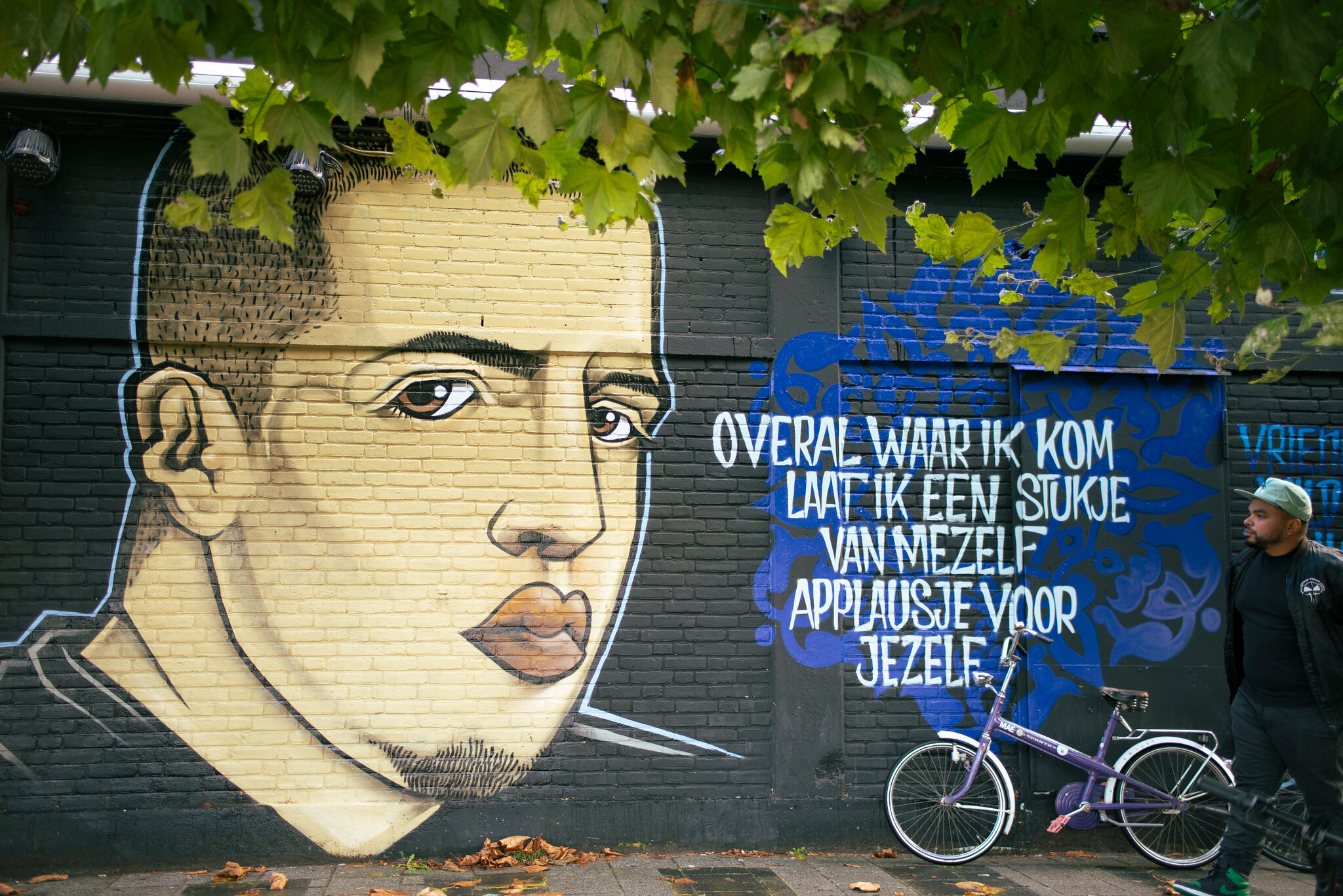 Can't get enough of WOEI FM? Check out WOEI FM #20 with ALP!