For episode 14, we linked up with self-declared Nikehead Jaimi Damion. Currently working as Art Director at a big IT firm, the football fanatic was previously working behind the scenes at Nike Sportswear and Nike Football, and even had his own football store in Hoogstraat!

We are curious - What are Jaimi's Top 3 sneakers from his collection and more importantly, what are the stories behind them?

Although I have both OG colorways of the Huarache Light, I have to admit that I prefer this womens colorway over the mens one because of the slightly toned-down features. I bought these back in the day on Lacebag I think. Before people started whining about how others should've tied their laces, before taking an on-feet picture, you could score some awesome deals there. I got to know a lot of the members, because it opened the floodgates for all the people in the Netherlands that wanted to show off their collections, grails and steals when social media was only a small glimpse on the horizon. Store visits, Legit checks, the whole thing.
Once, a big footwear guy from the Nike Sportswear team came up to me when I wore them to work and asked if he could buy them off me and I think I actually told him to check Lacebag to see if there was another pair.
ML75 was a bit too hardcore for me, and a bit before my time, but these shoes take me back to those forum days. 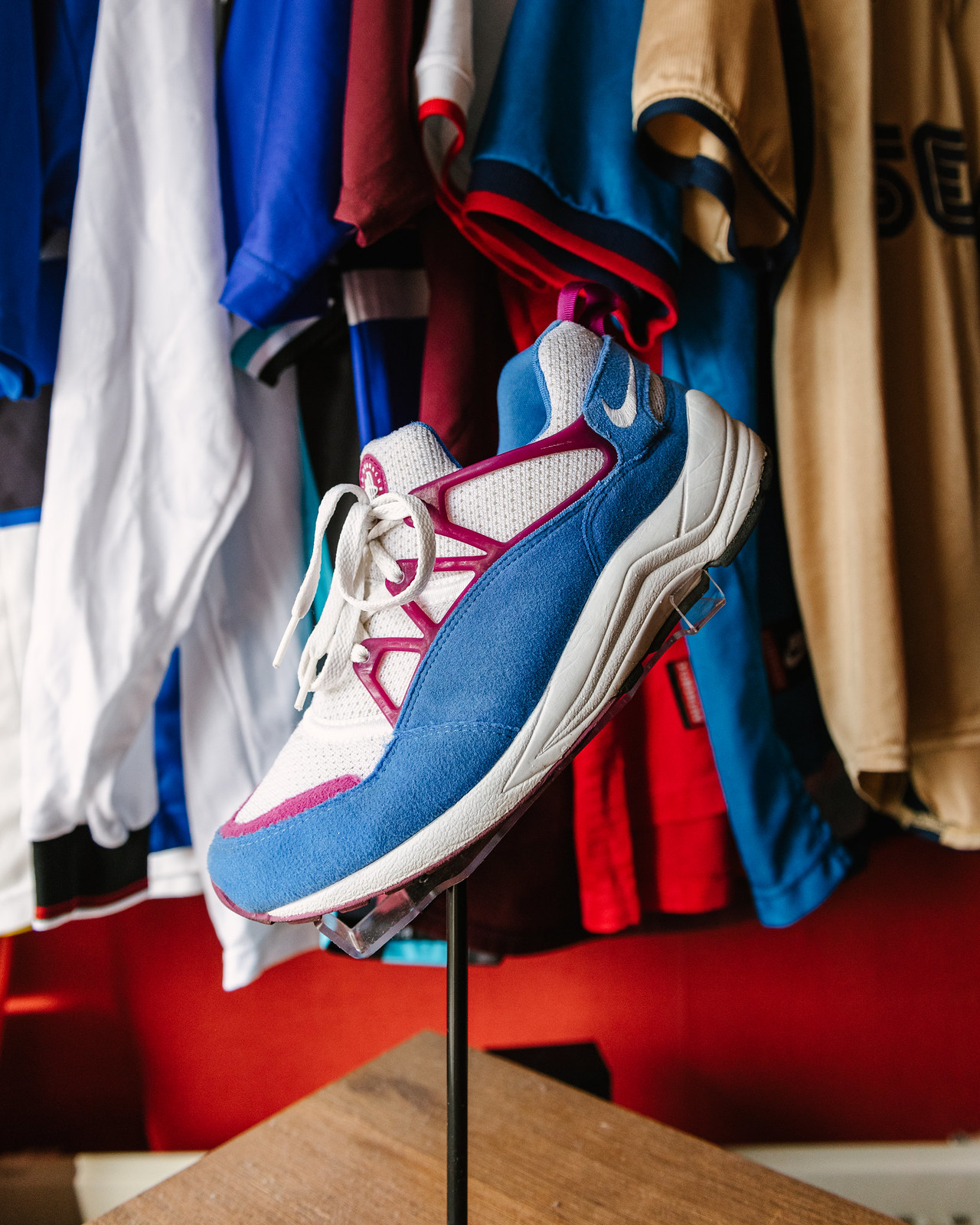 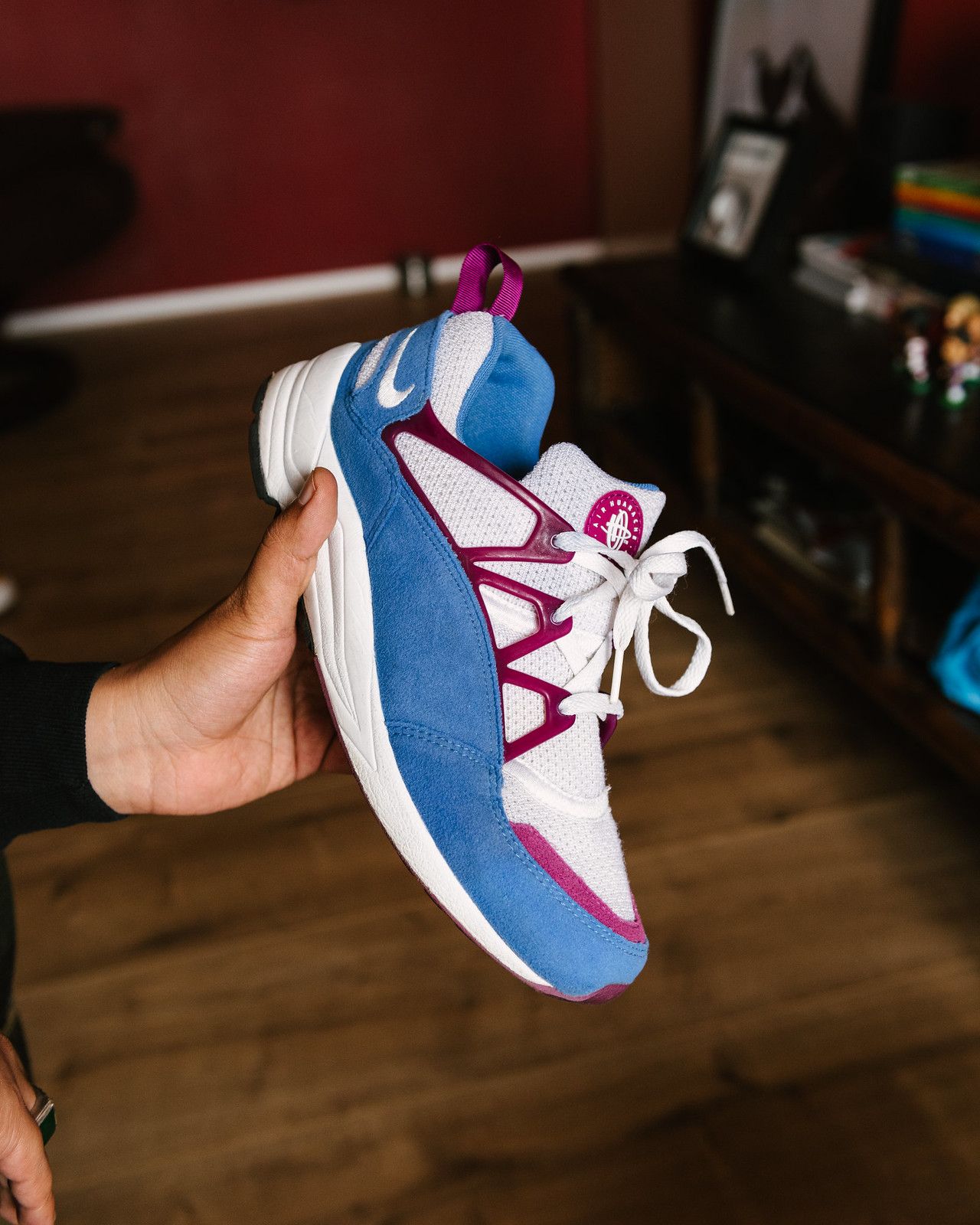 Back in 2004 when the Nike Rotterdam store opened, I was only into football and I couldn't care less about sneakers. Everything changed with the infamous "Power one night, when the famous "Powerwall Pack" released in our store. I was told that people from all over Europe would come, and at 4pm, the first people started gathering in front of the store. As the evening release got closer, we locked the doors in the afternoon to prepare for the release in order to avoid chaos. But oh well, with a release like this, you simply can't. The end result: Grown men shouting, fighting and crying over pairs of shoes.

As a store employee, you were allowed to pick one pair of your choice. Since I didn't care about any of the shoes from the pack, I went for an all-white pair of '93s. Later that night, as I sat on the subway home, I thought to myself "Shit! This is kind of a big deal... What did I just witness?"

And the craziness went on until the next morning when there was ANOTHER line. So I realized, I have to do some research about this sneaker thing. When I asked one of my colleagues that did know about the footwear community, he referred me to this website pickyourshoes.com. As soon as I fired up the website, I laid my eyes on this beautiful OG Spiridon. The chrome swoosh did it for me. Although it was sold out even back then, the Spiridon became my grail and the hunt for me, the new-born sneakerhead, was on.

In 2016, I finally had my chance to get my hands on my long-time grail. This NikeLab release comes a bit closer to the original as the general release that followed a few months later. While the Powerwall pack sparked my interest, it wasn't until I saw this Spiridon that I became the footwear hoarder that I am today. 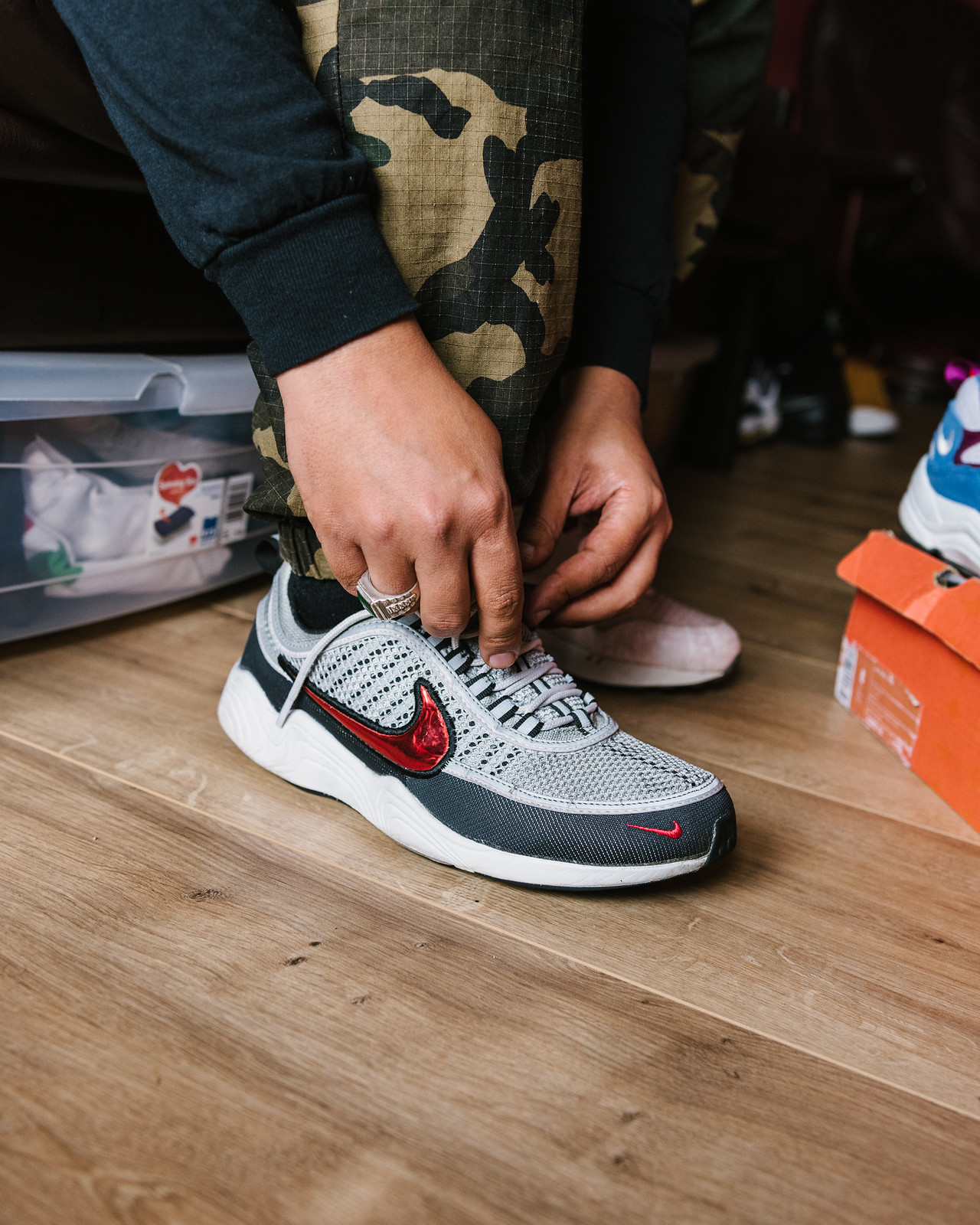 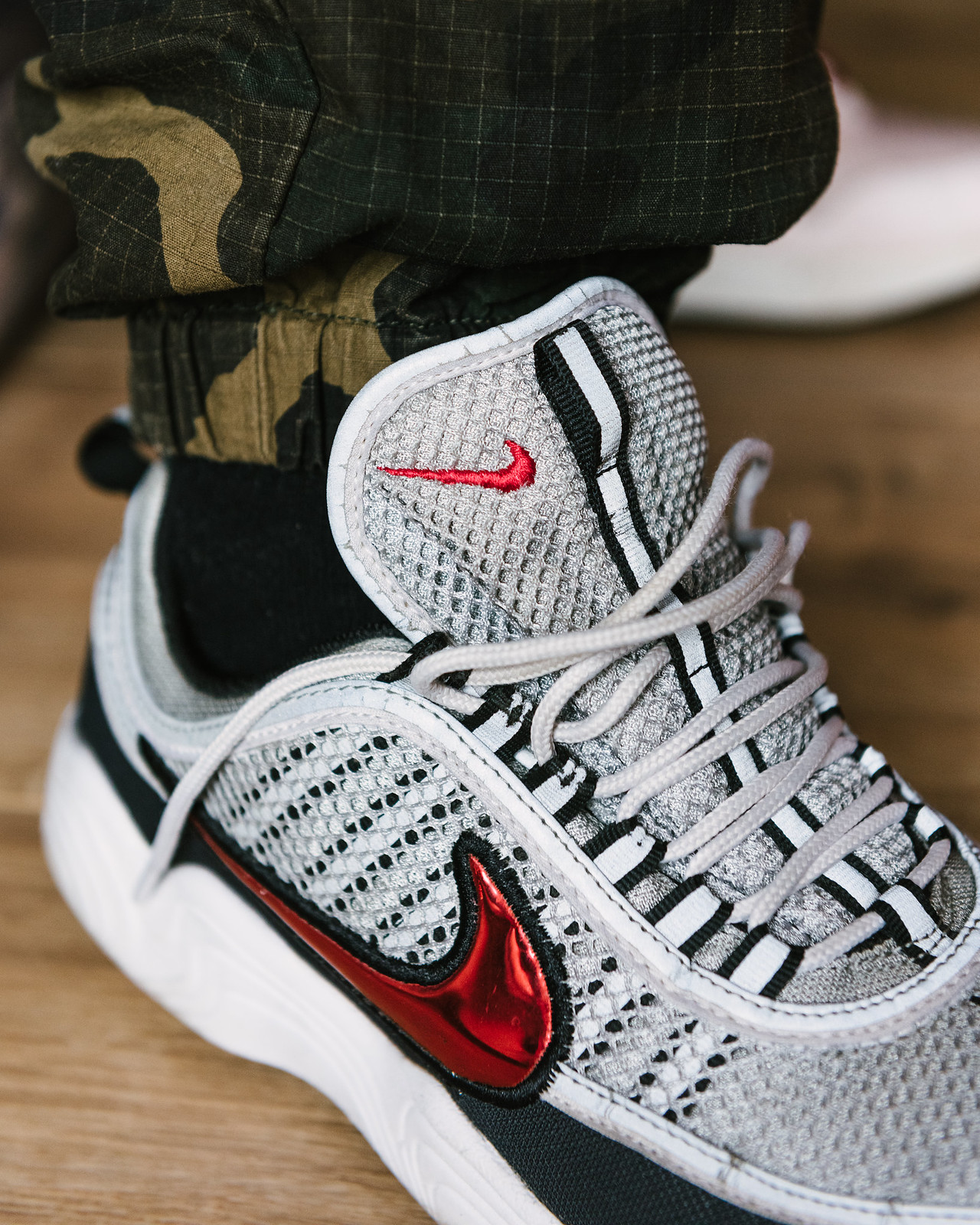 The Escape II colorway is a very neat, "grown up" rendition of this color combination, using (quality)leather, (quality)nubuck and (quality)suede. Mind you, these are 17 years old, and although the bubble might pop any minute the upper is still in super condition even after years of wearing. I also have the AM90 and the Huarache, but the AM90 is falling apart on all sides. But the '93 is easily my favorite of the pack. I did not know what to think of the Air Trainer Huarache back then, and I'm afraid that wearing these for more than a day is impossible by now.

Every now and then, I wear them when my car needs gas. Short distances. In the case they fall apart, I can drive home wearing my socks to cry. 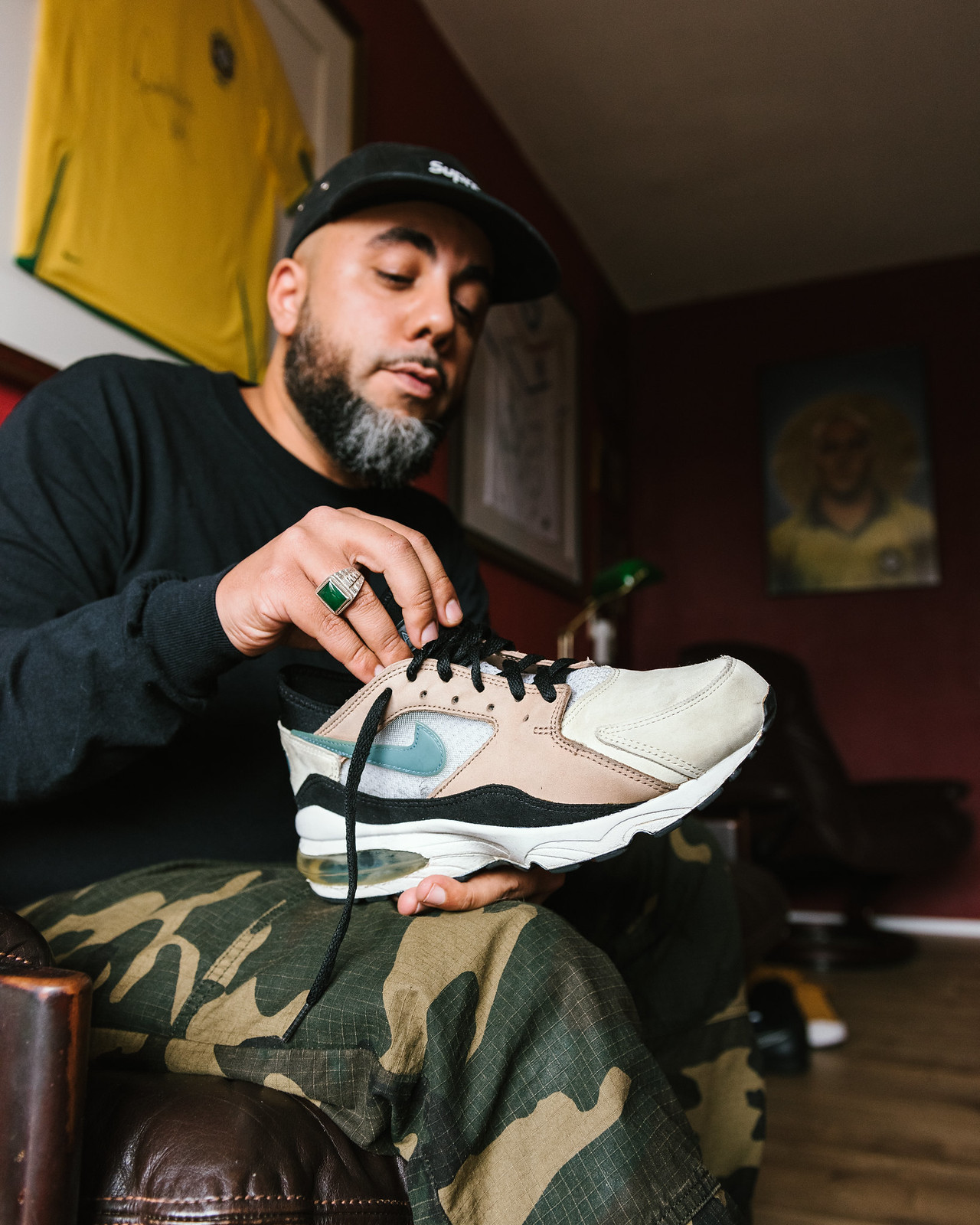 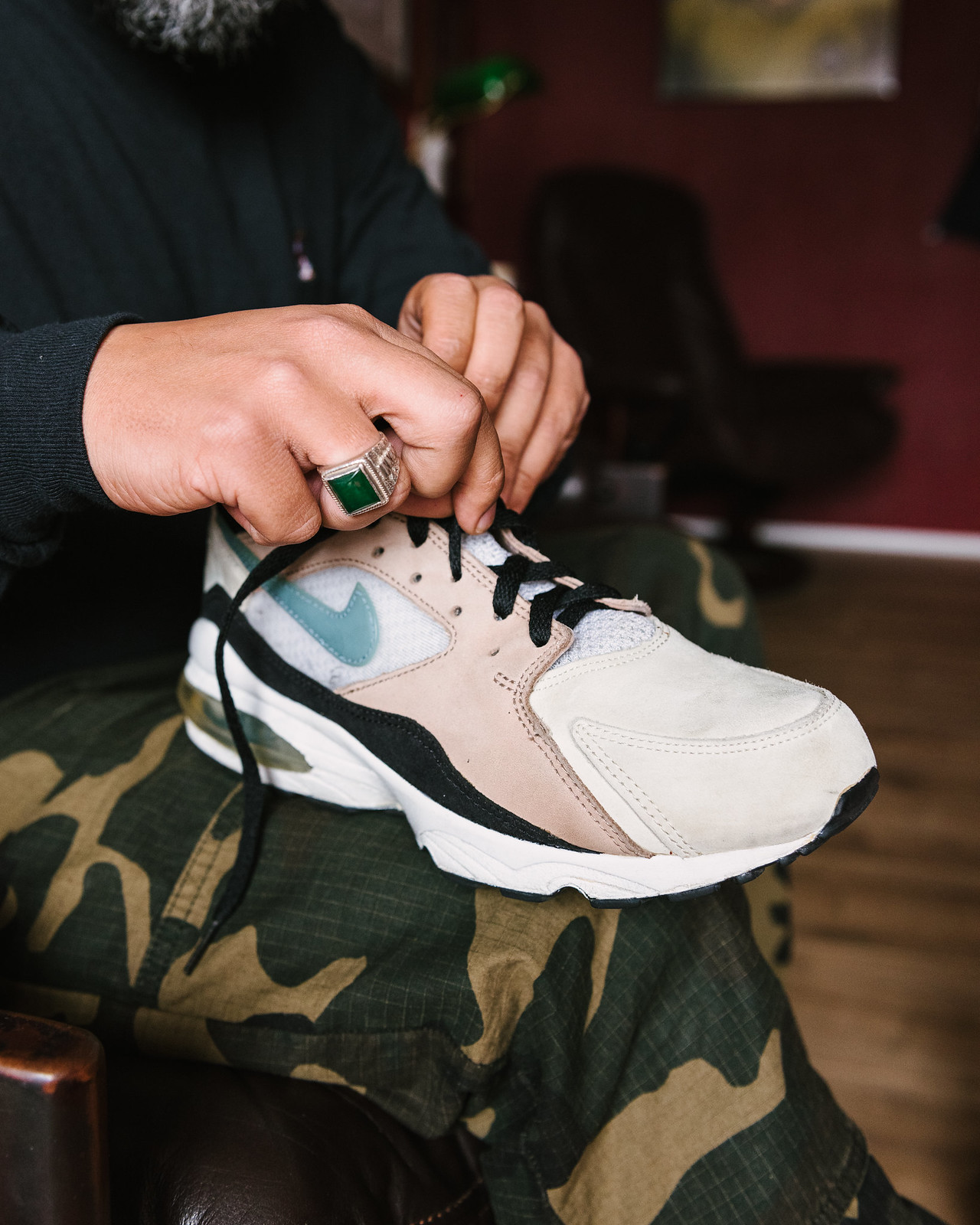 This shoe is not a sneaker, but it did start my Swoosh fetish.
Back in the late '90s, I was a big Ronaldo fan. And Ronaldo got his very own signature boot in '98. The soccer cleat had no tongue, since always cut them off, was made of synthetic, lightweight leather that moulded around your foot each time you put them on. I still have the original print ad laying somewhere, which mentioned that the shoes had the exact same weight as Ronaldo's Brazil jersey.

It was the most comfortable boot I ever played in as a kid, and I saved all my money so I could get the new ones one year later. When going through some online rabbit holes I noticed that one of my favorite sneakers, the Nike Air Spiridon, and my favorite football shoe, had the same designer: Christian Tresser.

This particular pair is a sample I got from the Nike Football VP when she left. She gave it to me as sort of a goodbye present, since she knew that I had my eyes on the shoe for months when it was on her desk. Compared to the released version, the sample has a different all black outsole and on the inside is a cut Tiempo inlay sole. This shoe perfectly combines and brings out all the nerdiness in me: Football, sneakers, Nike and design. 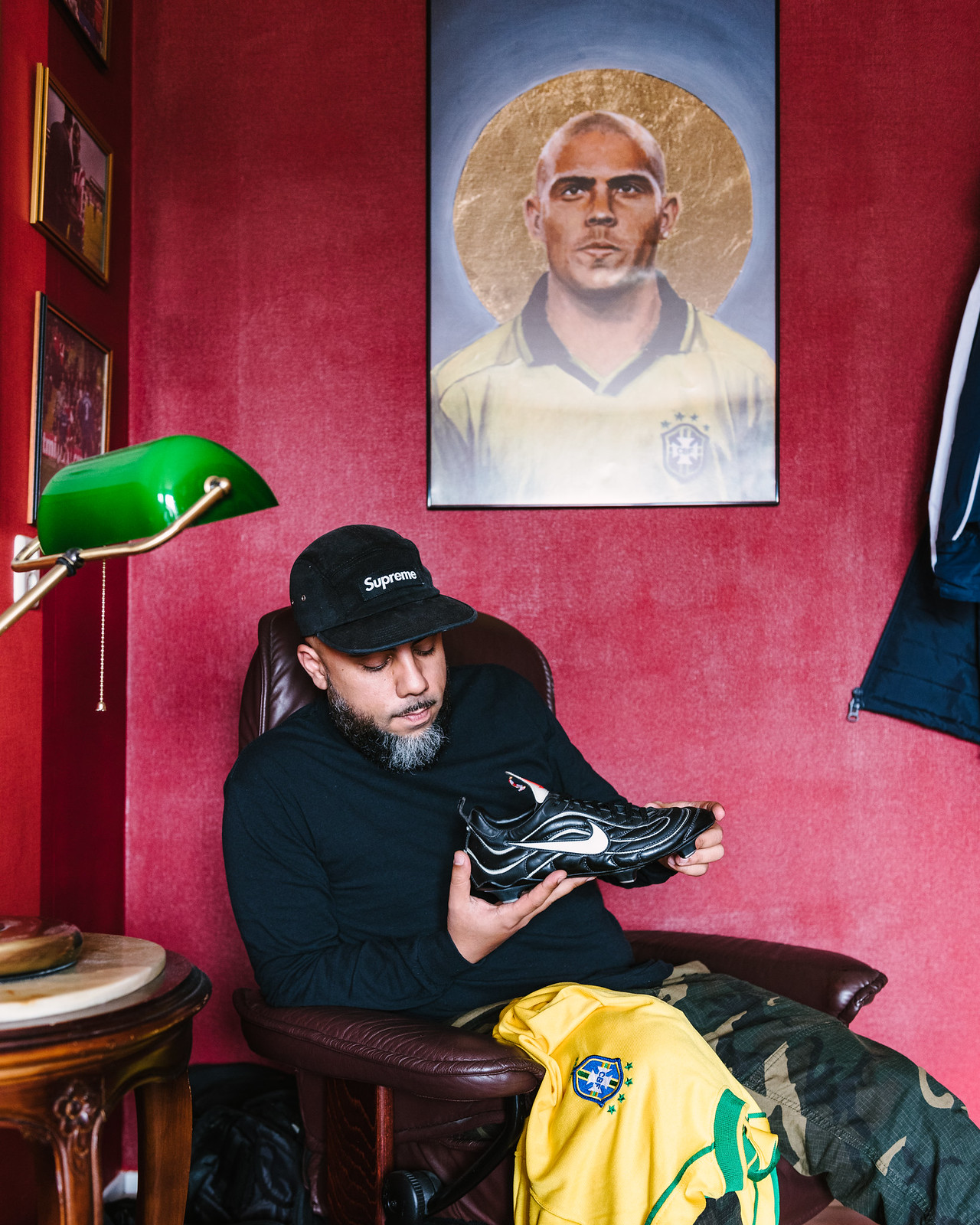 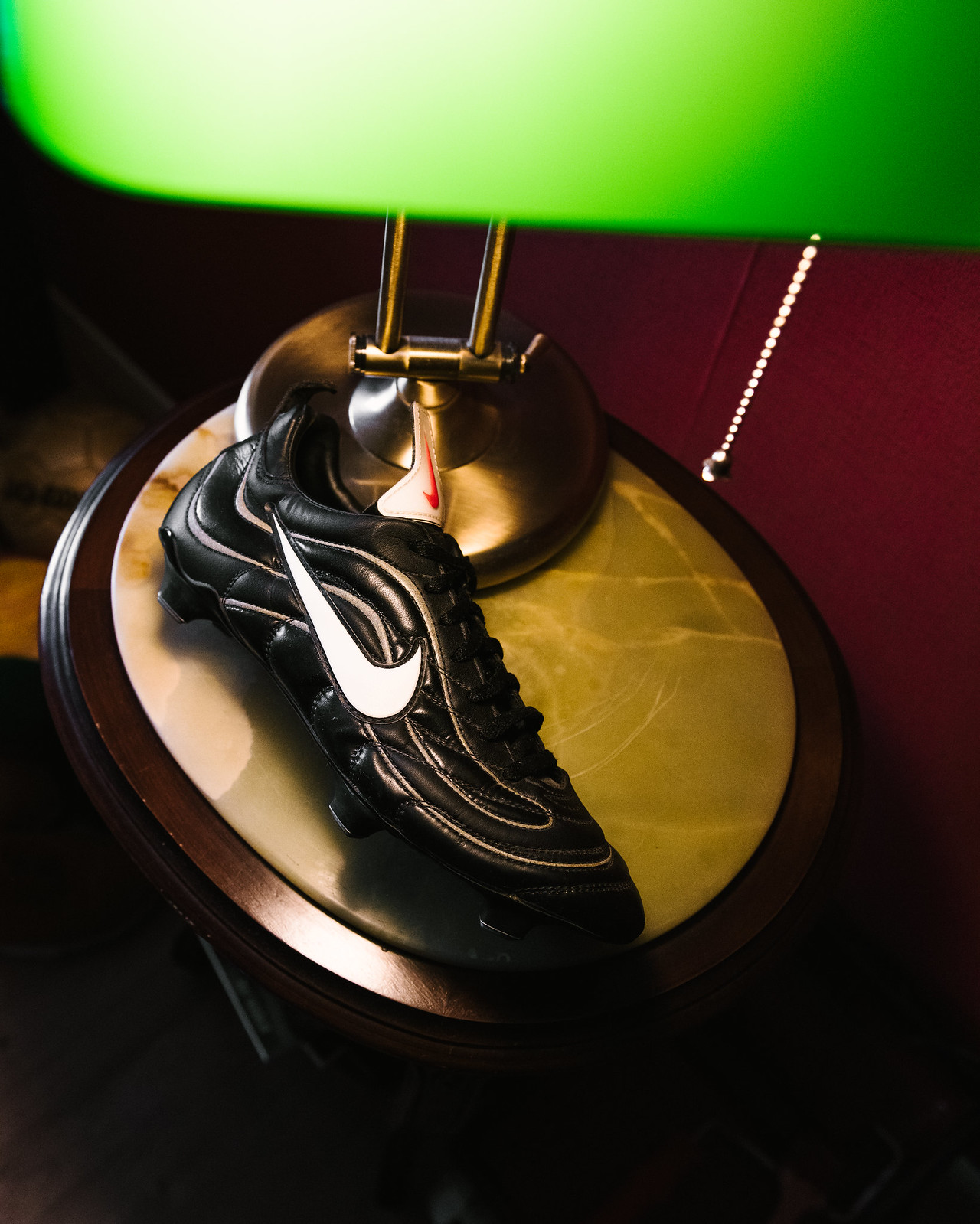 "This shoe perfectly combines and brings out all the nerdiness in me: Football, sneakers, Nike and design." 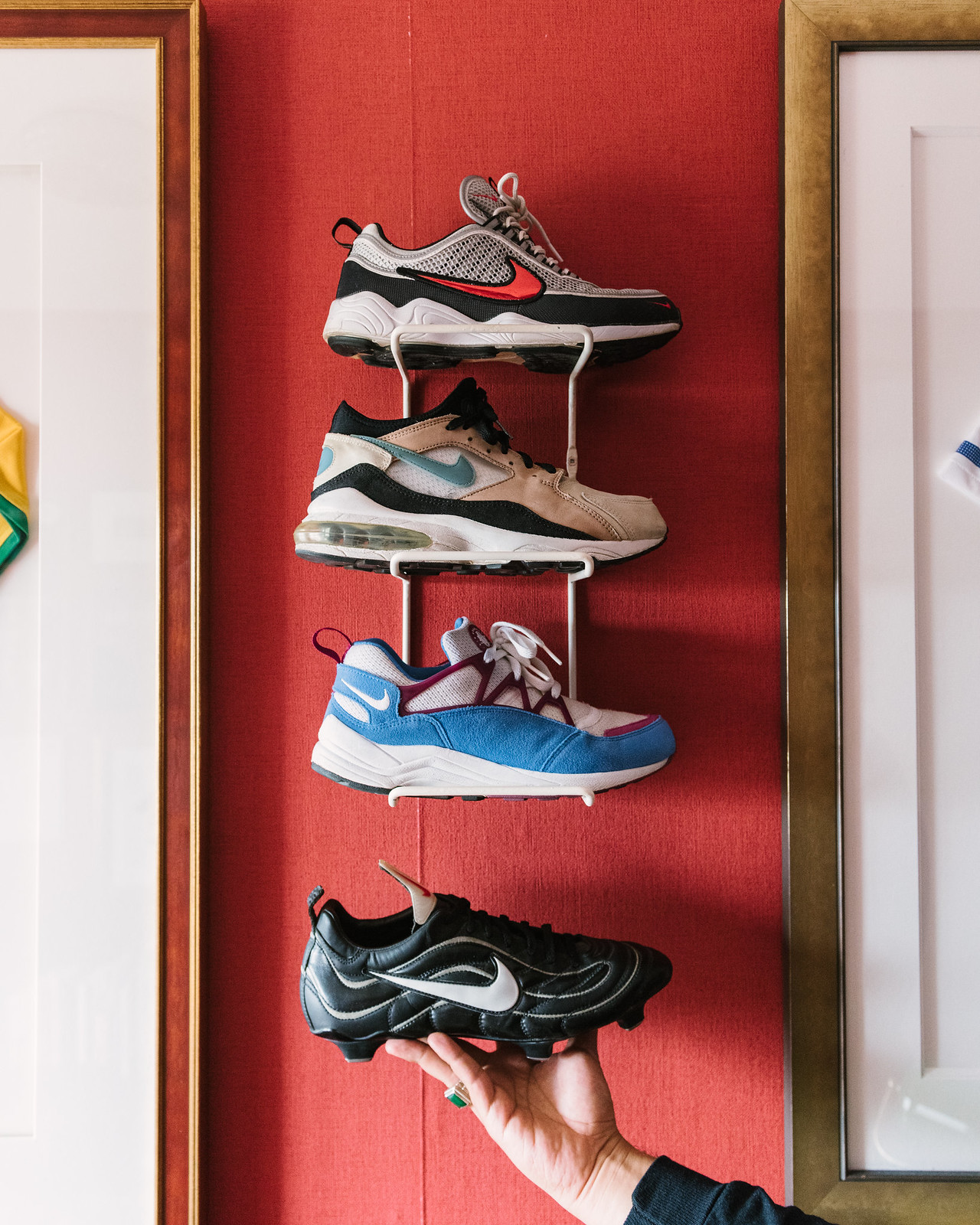 CLICK HERE FOR THE PREVIOUS KICKIN THE DOOR WITH SHOP-OWNER AND DESIGNER MARGARET WEST!