In his day job Thomas Fonville is a teacher at the Willem de Kooning Academy in Rotterdam, next to that he is an avid fan of popular culture, of which sneaker culture is a large part.

His collection consists now of about 80 sneakers, it used to be larger, but throughout the years he sold some of it. His collection is spread across the house and divided into what he wears and what he doesn't wear. Some shoes Thomas just collect only to have.

We are curious; What is Thomas his top 3 sneakers?

This model started my love for sneakers. I believe the original model came out in 1990, it must be some years later that I saw this model (in a black colourway) at a sporting goods store in Rotterdam. I asked my mom if I could get them, and she answered that I should get a paper route. By the time I got a side job, years later, the model was long gone, but the memory remained. It was around 2004 that Reebok reissued this model, and I bought it in a variety of different colours. It is rather a bulky shoe and is very comfortable, this because of the Gel sole and the inflatable tongue. Of the versions I have, this 2004 edition, what is a collaboration with Japanese brand Revolver, this is my favourite. 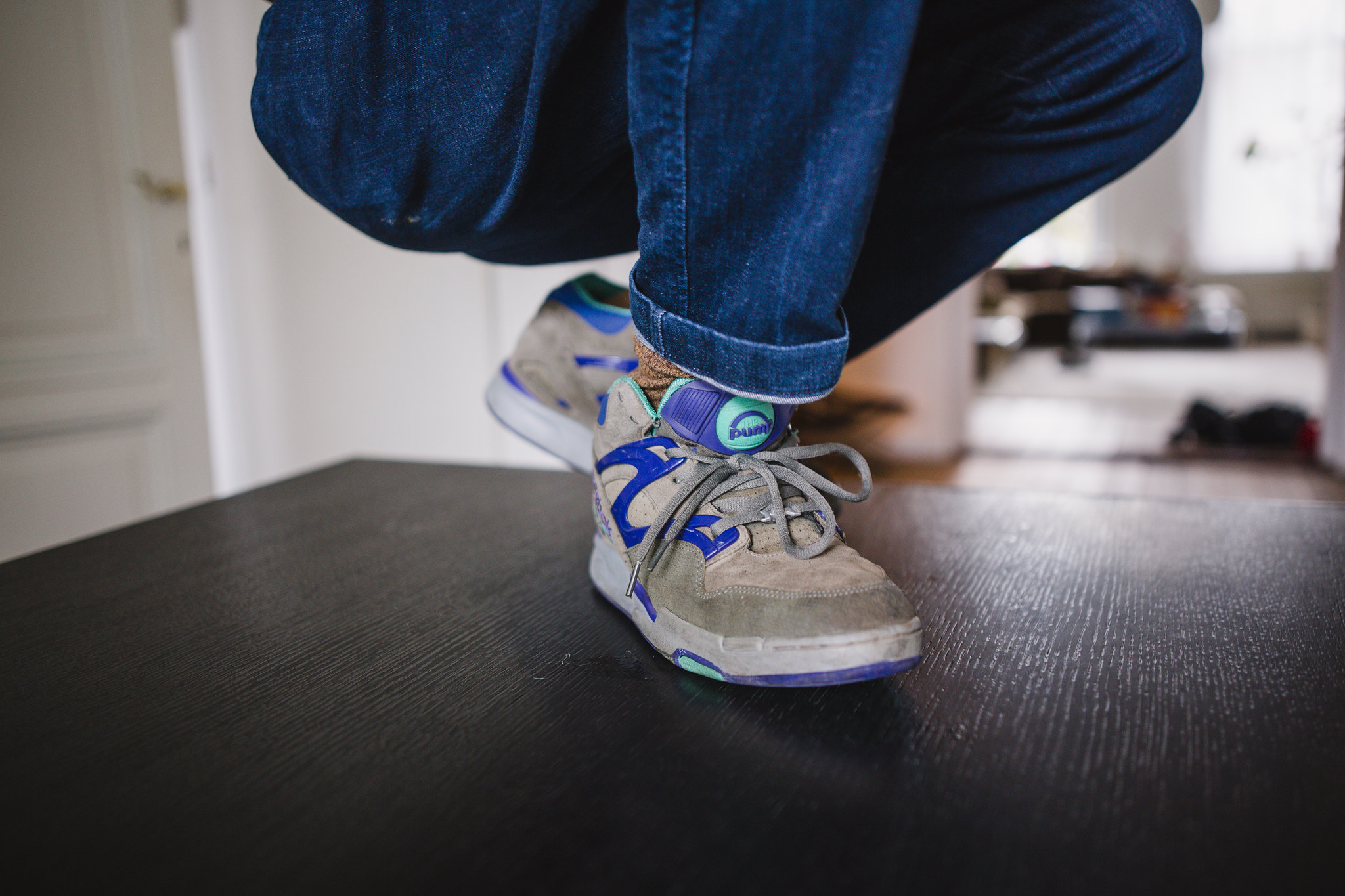 The moment I saw this shoe in a preview, it was for me a confirmation of what a sneaker is all about. This shoe came out in four different colour-ways, from which I found the white one the best colourway. I already was a fan of the brand Supreme and liked the Nike cross-trainer. This shoe has a lot of different elements; from the marble strap on the front, a black grid on the side, till a translucent sole which reads Supreme. That makes it very interesting and is a SB model which stands for SkateBoarding. A fitting collaboration, instead of some of the ones Supreme nowadays undertakes. This shoe is ideal for cold feet, and in some way they are really warm. 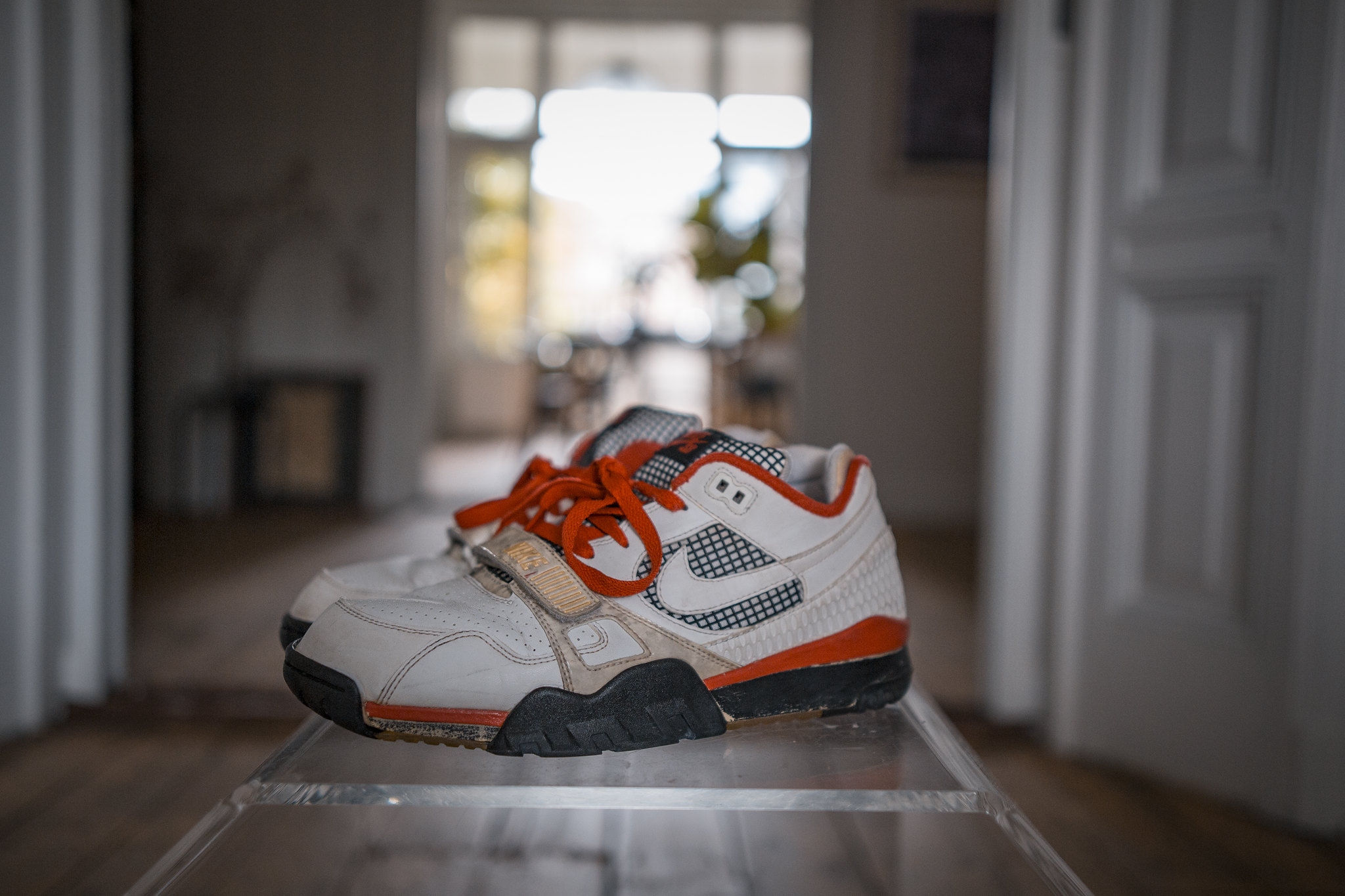 This shoe was first released mid 90's, then around 2004 and most recently in 2014. My version is the one released in 2004. Again, this model is present in my collection in different colours, this one being the best. The shape of the shoe is something else; sleek and a large side panel which defines the whole shoe. The use of contrasting colours and the bright white midsole make this shoe stand out. This shoe is one piece, which makes it feel like a sock you put on and is comfortable as can be. I used to work out on the huarache light beams edition (don't worry, only indoor). 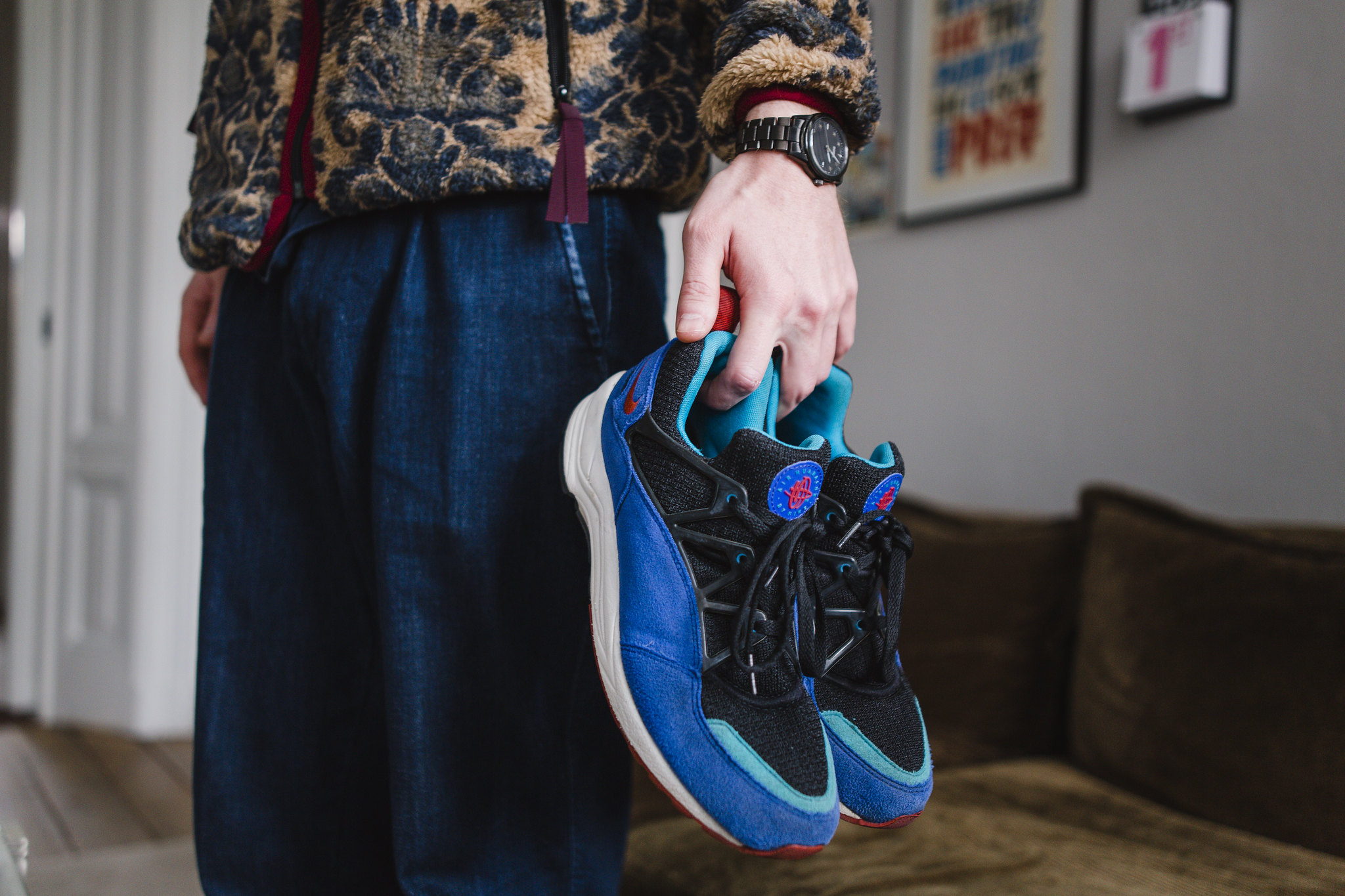 A large portion of my collection consists of New Balance, and this shoe is one out of the “Konbini” pack. Konbini are Japanese supermarkets, mine is based on the colours of the AM/PM supermarket. The 574 is a classic, which has a great heel. This shoe deserves an honourable mention, part of the combination of a classic and the Japanese character, which I love. 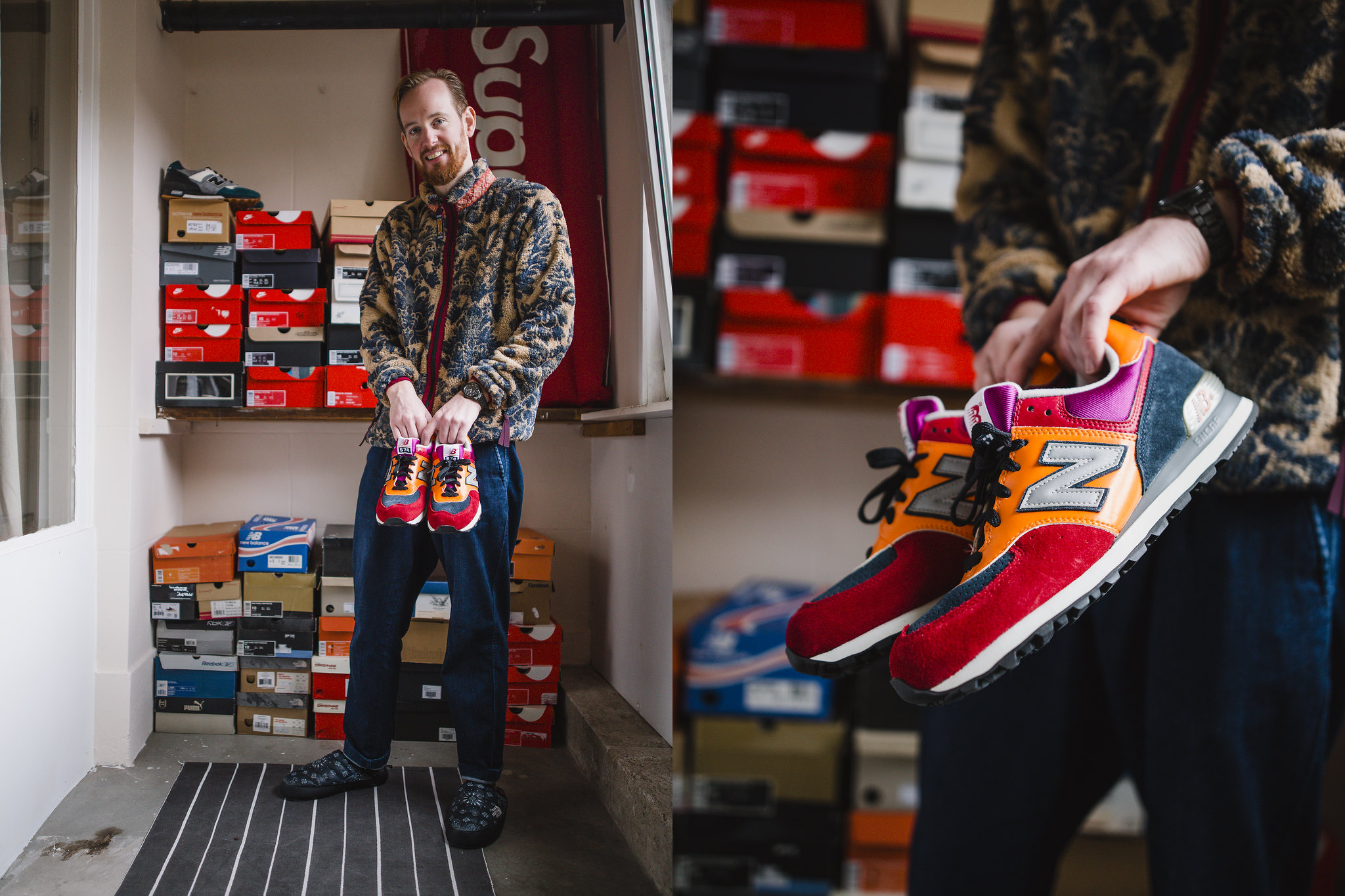 "Konbini are Japanese supermarkets, mine is based on the colours of the AM/PM supermarket." 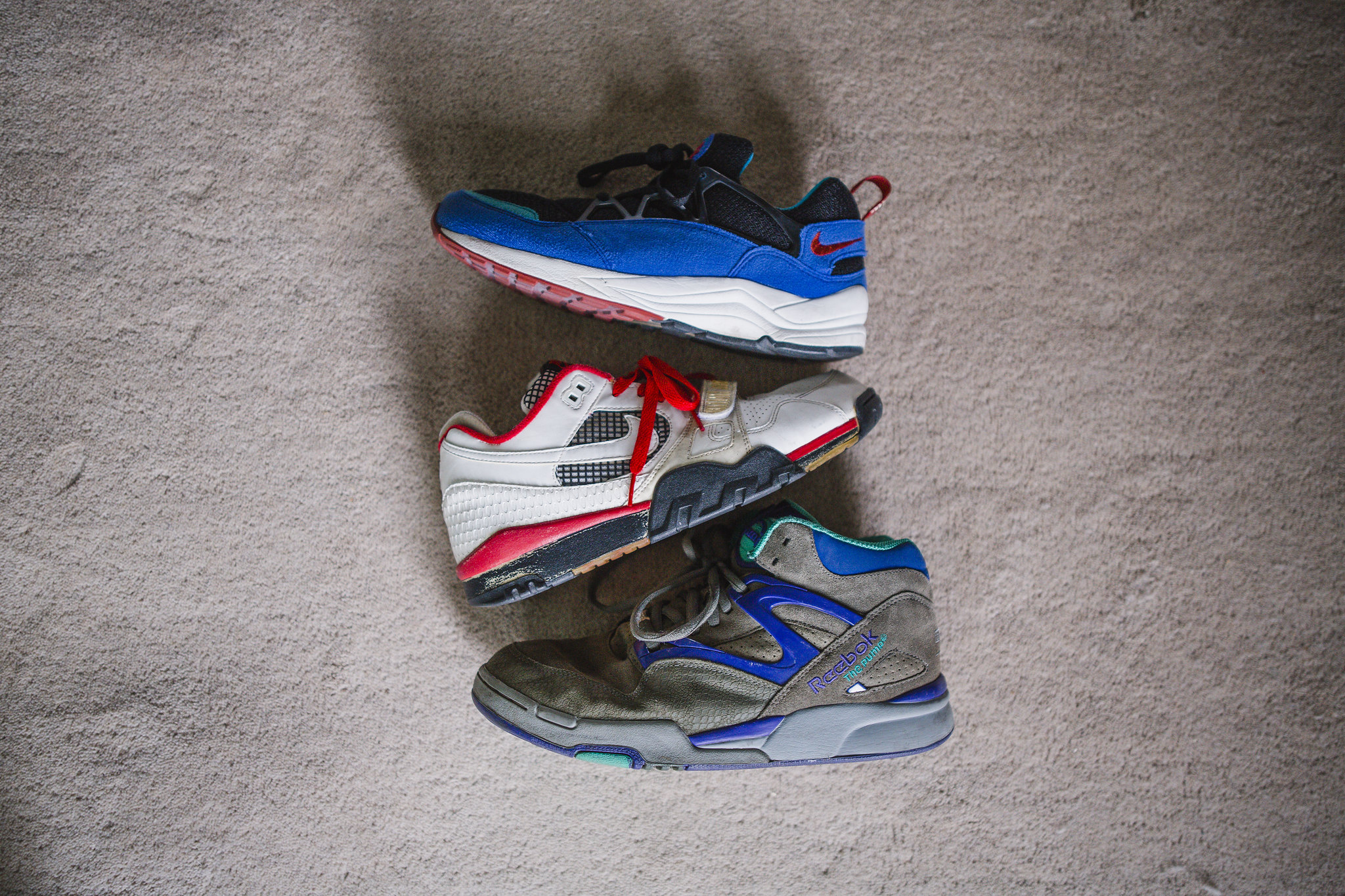