And sooner or later, you cannot postpone thinking about the question of all questions any longer:

What are your Top 3 sneakers?!

For the 10th episode of the Kickin' the Door Blog series, we caught up with Rotterdam-based director and filmmaker Rocky "Sir Rocco" Roos to talk all things sneakers. Around 9 years ago, Rocco turned his passion for music and film into his occupation as he pursued a DJ and producer career. Although you might still catch him behind the turntables if you're lucky, he is currently more committed to directing and filmmaking. One of the most notable works of his include a short film about Woei for the biggest Indonesian sneaker event called Sneakerpeak, which you can check out here!

Check out the interview below to find out how Rocky's personal style has evolved over the years and which 3 pairs he would save in case of a zombie apocalypse.

We are curious - What are Rocco's Top 3 sneakers in his collection and more importantly, what are the stories behind them?

A good friend of mine told me about this release. Just as a little side note, he's the real MVP of Japanese fashion. His items are mad and he was also one of the main reasons why my interest in Japanese fashion brands grew over the past few years. That's why I want to give him a little shoutout, you know who you are.

Before he introduced me to fashion from the country of the rising sun, I was into a completely different aesthetic: I remember wearing Clarks Wallabies with some Karl Kani pants, a Wu-Wear shirt, a Helly Hansen jacket and to top it all off, a Fubu cap. Around 2015/2016 came the big turnaround when earthy tones paired with a more tactical aesthetic became increasingly appealing to me. Ever since I pulled off this 180° style transformation, I stuck with it and dived even deeper into this niche. I find it really interesting how our personal styles can change completely and unexpectedly over the years.

My #3 pick is a collaboration between two legendary brands in their own respective disciplines: Vans in skate footwear and WTAPS in military inspired apparel. While I'm assuming that most people are familiar with Vans, WTAPS (pronounced "Double-Taps", not "Double-U-Taps") is a Japanese fashion brand that was founded in 1996 and focuses on military and outdoor inspired apparel. When I saw first images of this particular SK8-HI LX, I was really into earth tones, which was the reason why this shoe instantly caught my attention. To top it all off, it turned out to be a collab with WTAPS! 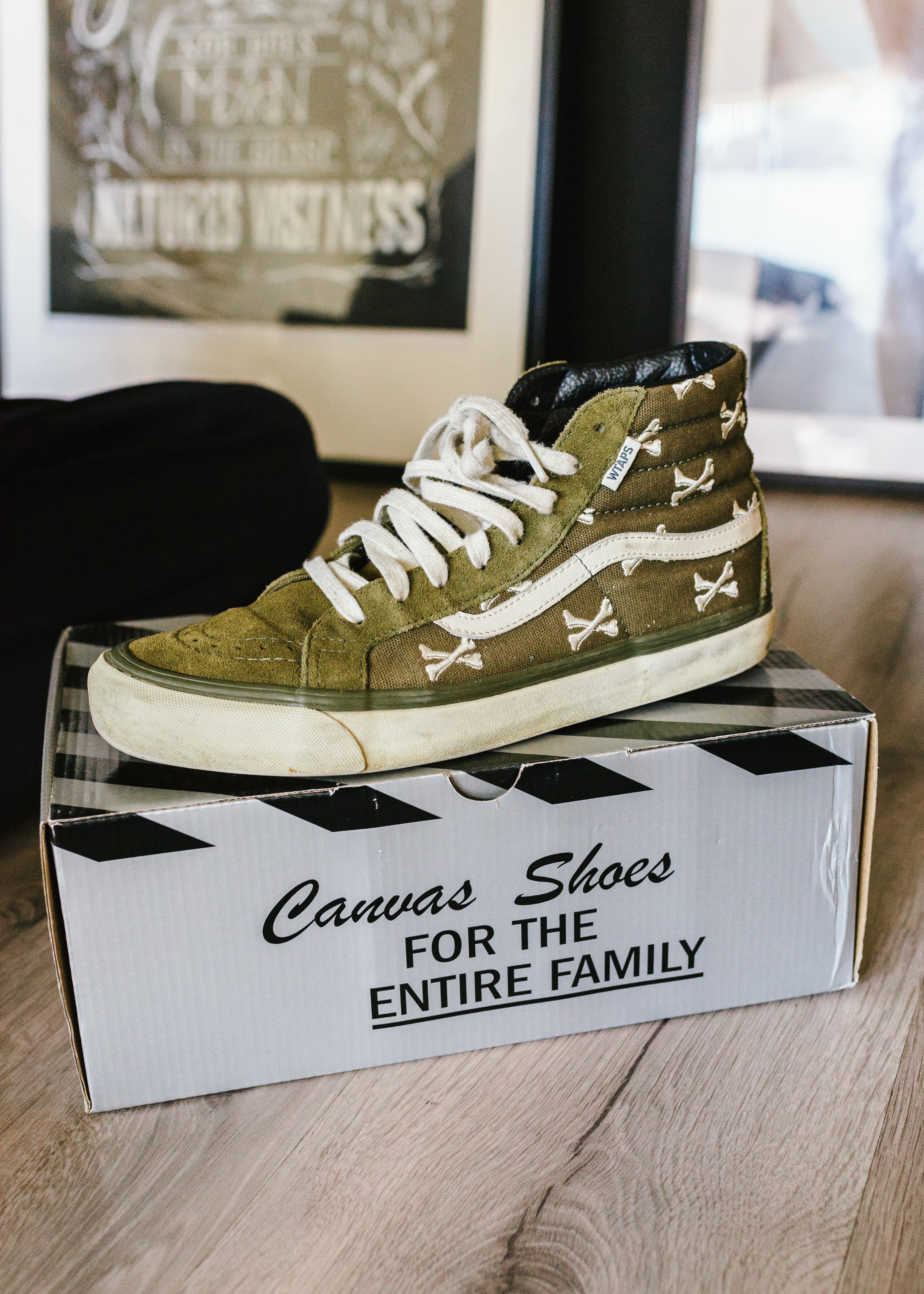 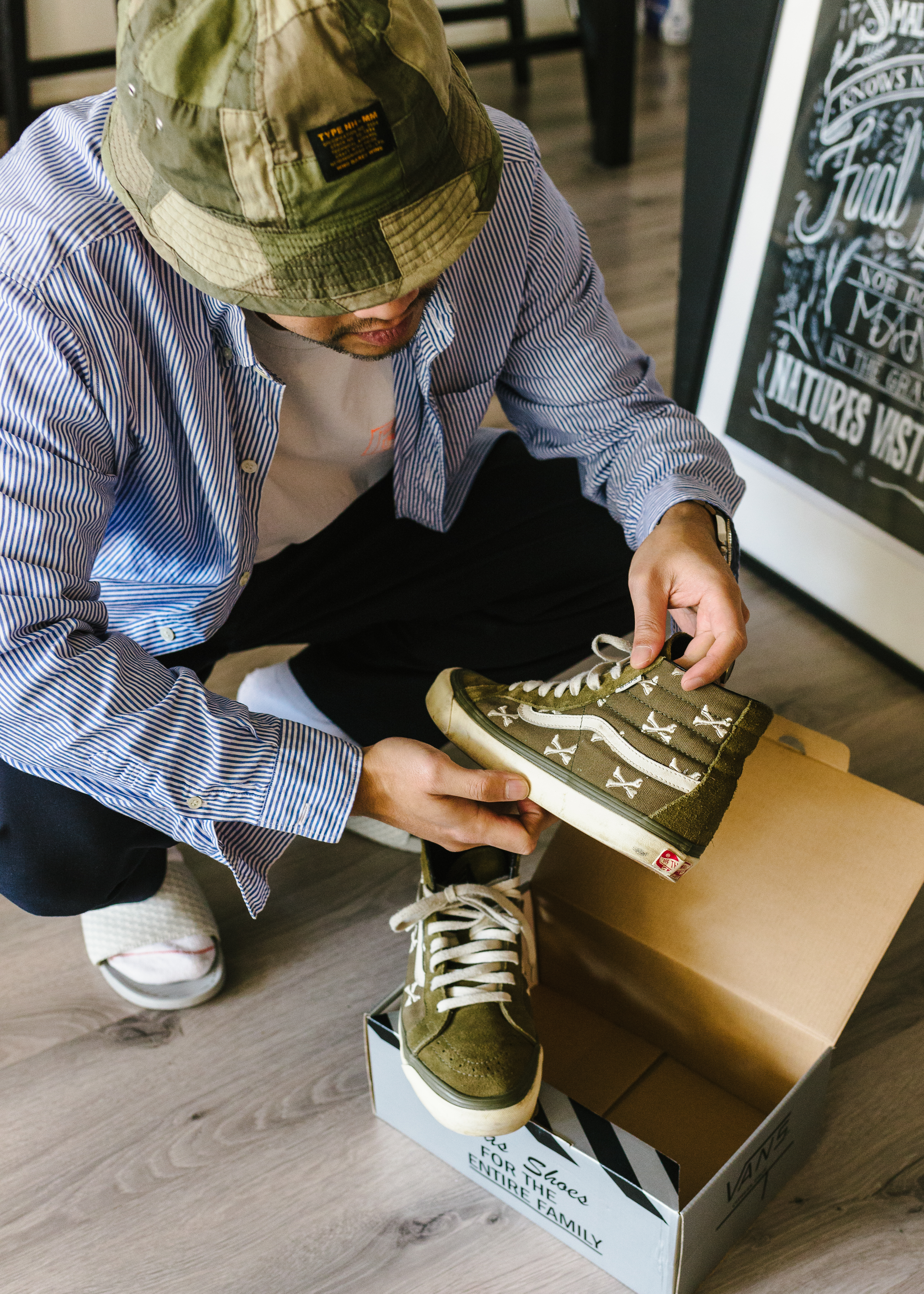 The FBT, or as some may call it: The visvim icon. Around 2006, I saw this shoe for the first time and it immediately raised my interest in the brand behind the shoe: Hiroki Nakamura's brainchild called "visvim". Unfortunately, I had to put any plans on copping a pair aside for a while, as I learned the painful lesson that visvim was (and still is) that brand that was just way too expensive for me to afford (given its regular retail price of well above €500,- I don't think its that surprising).

This changed however, when my interest in Japan grew and I finally went on my first trip to Tokyo in August 2017. As I was treating myself to some well-deserved birthday shopping at the Rinkan flagship store in Shibuya, one of Tokyo's infamous high-end second-hand shops, I couldn't believe my eyes when I saw a pair of FBT's on sale for a mere €250,-. Subtracting taxes, the total dropped even lower to €225,-. Although I considered this to be a great deal, it was still a lot of money for a pair of shoes, and so I decided to go for a walk and think about it. As I passed by the other Rinkan location in the second-hand and vintage heaven area Shimokitazawa, I noticed that they were giving away "20% off" discount coupons. I gladly accepted their promotion and sprinted back to their Shibuya flagship as fast as I could. All-in-all, I ended up paying €180,- for the pair in the picture.

After reading this little background story, you can hopefully understand that this shoe, which is originally inspired by traditional Native American moccasins, does far more than just keep my feet nice and comfy. It has become an item that reminds me of my first trip to Tokyo and is one of the best-ever birthday presents I treated myself with. 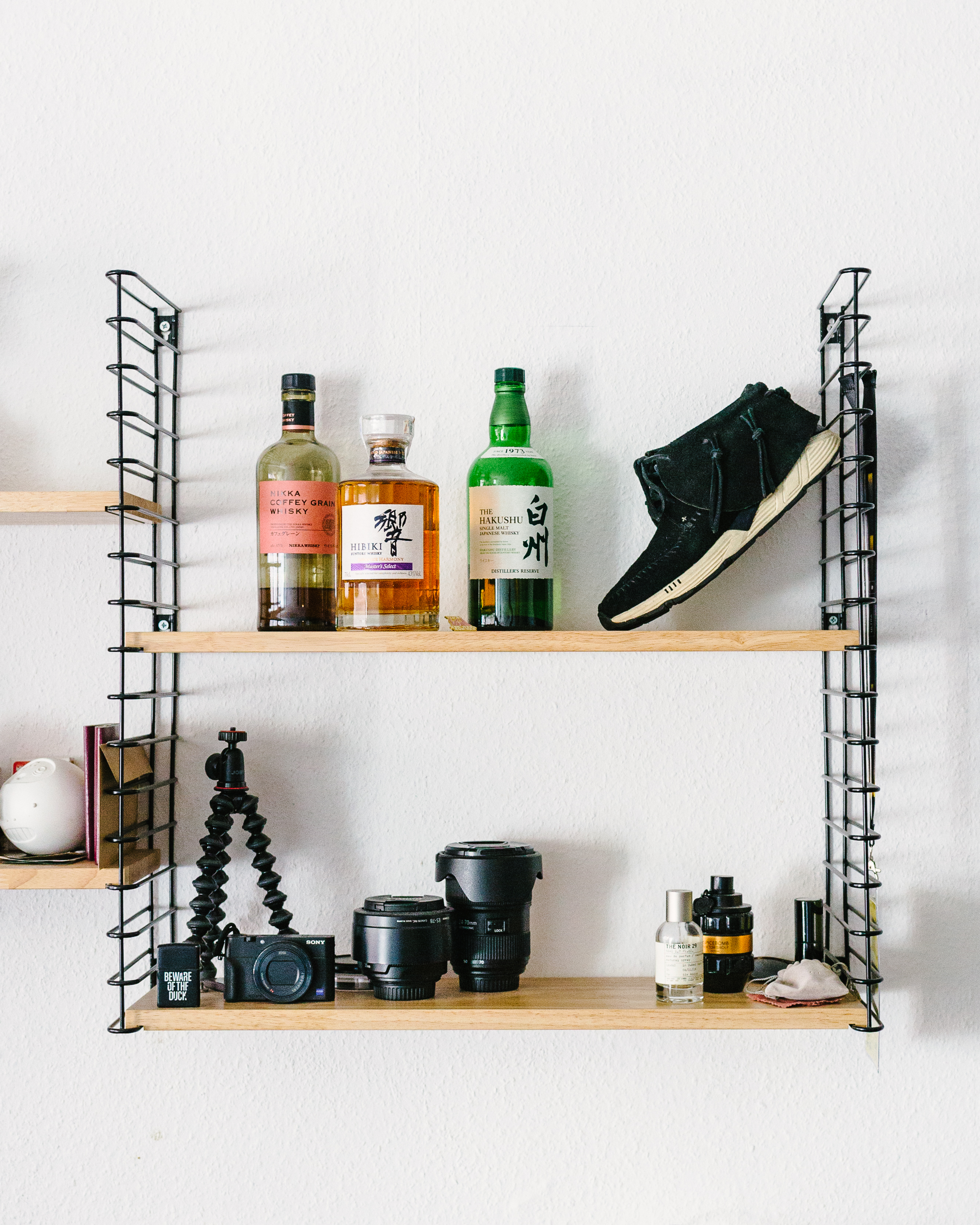 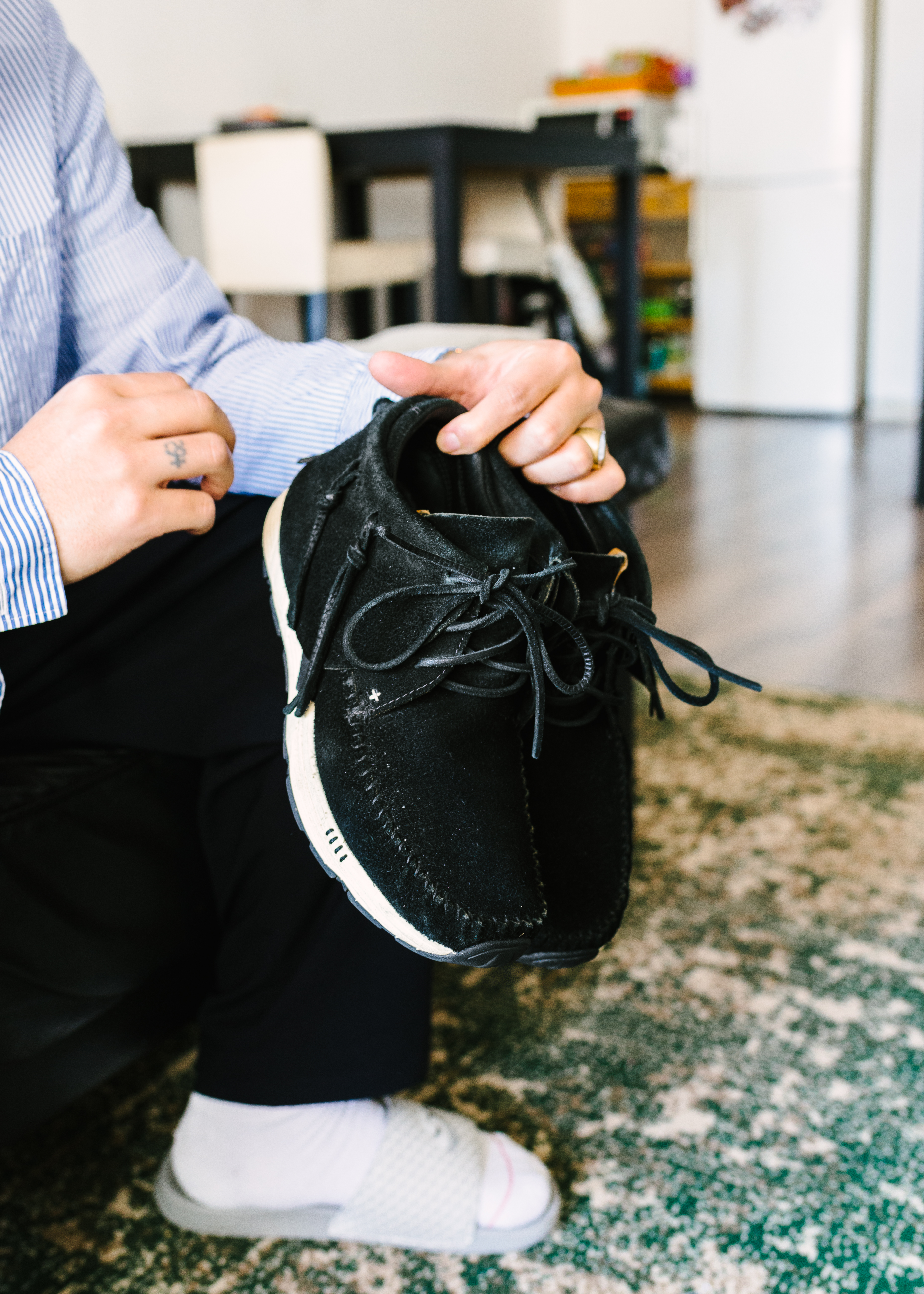 I have always liked Angelo Baque's Awake NY and paid close attention to the rumours I had been hearing around a possible collaboration with Asics, which was apparently releasing around summer 2019. I remember being immediately sold on the pair as soon as I saw the first few leaked photos. But you're probably familiar with the sad story of every somewhat hyped release since the invention of sneaker raffles: You enter numerous raffles, get your hopes up and are left distraught after you don't hear back from any of the lotteries you had entered.

So there I was, still a little sad but fully determined to get my hands (or in this case, my feet) on the "Silver/Mint Green" colorway. After weeks had gone by and my hope of finding a pair for a decent price slowly faded, I started reconciling with the idea that seemed to be inevitable: Accepting the fact of possibly having to pay resell. All of this changed out of nowhere and totally by coincidence when my girl found an online store that appeared to be selling the shoe for retail price. Keep in mind that this was weeks after the original release. As I scrolled through all the greyed-out sizes on the product page, I only saw one size that had a little note stating "Only 1 pair left" next to it. This size just so happened to be my exact size. Never in my life have I typed all my shipping and payment info so quickly.

Awake NY and Asics did a great job with this collaboration. They kept it very clean and simple: The use of this particular green hue in combination with the soft leather patches and silver mesh makes for the perfect summer sneaker. While the Asics branding is very subtly embroidered on the tongue and near the heel counter, Awake NY branding is embossed on the mudguard. Co-branded insoles and trail-style round laces complete the look. Lastly, the classic Asics branding on the side (quarter panel) is reflective, which is a neat detail. According to Awake NY founder Angelo Baque himself, this shoe draws inspiration from his time growing up in New York and Paris: "The design and inspiration comes from going to Flushing Meadow Park as a kid and always being fascinated by the Unisphere and then as an adult I started coming to Paris and loved walking around at night in the golden lit streets." There you go, keep that in mind! 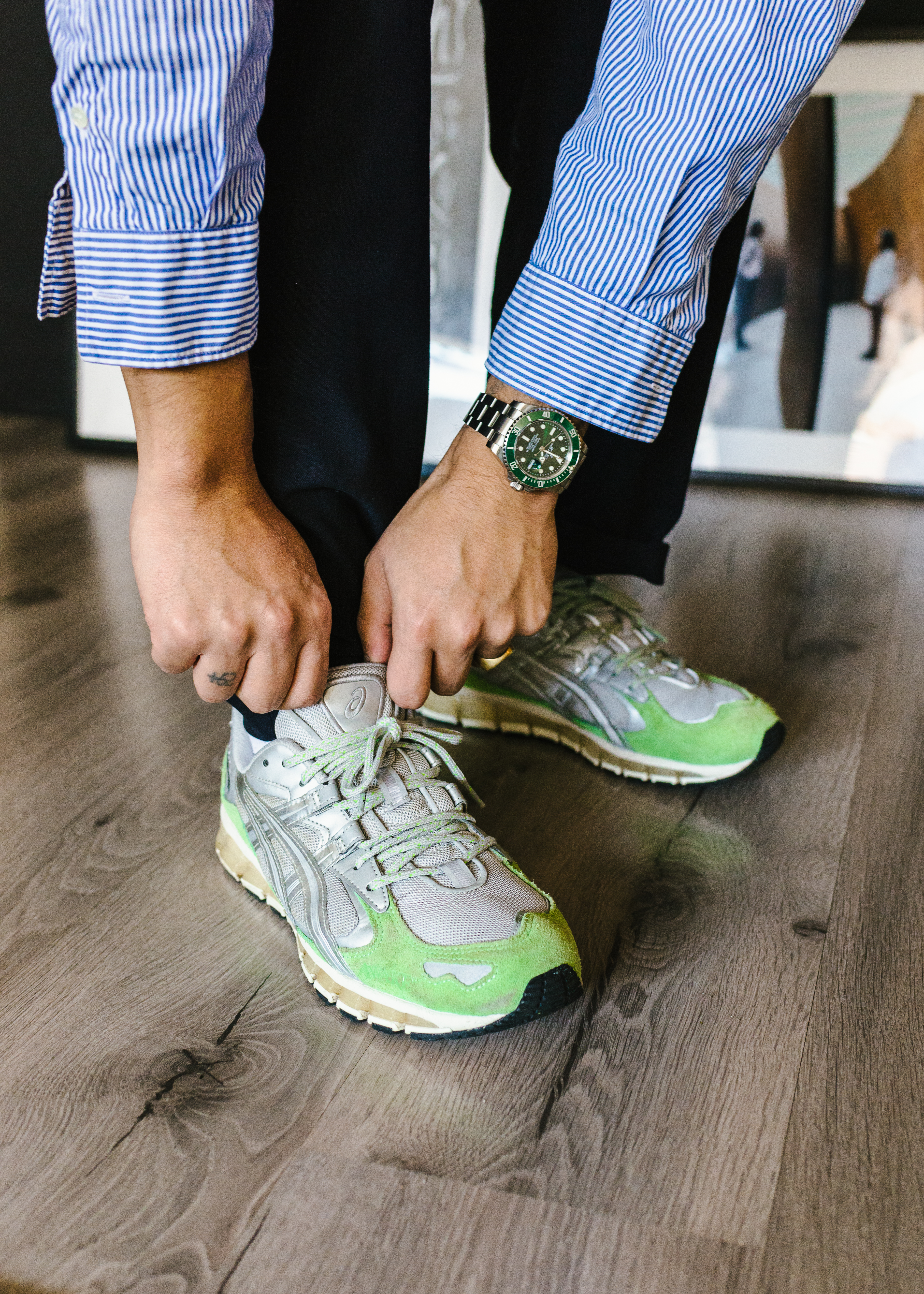 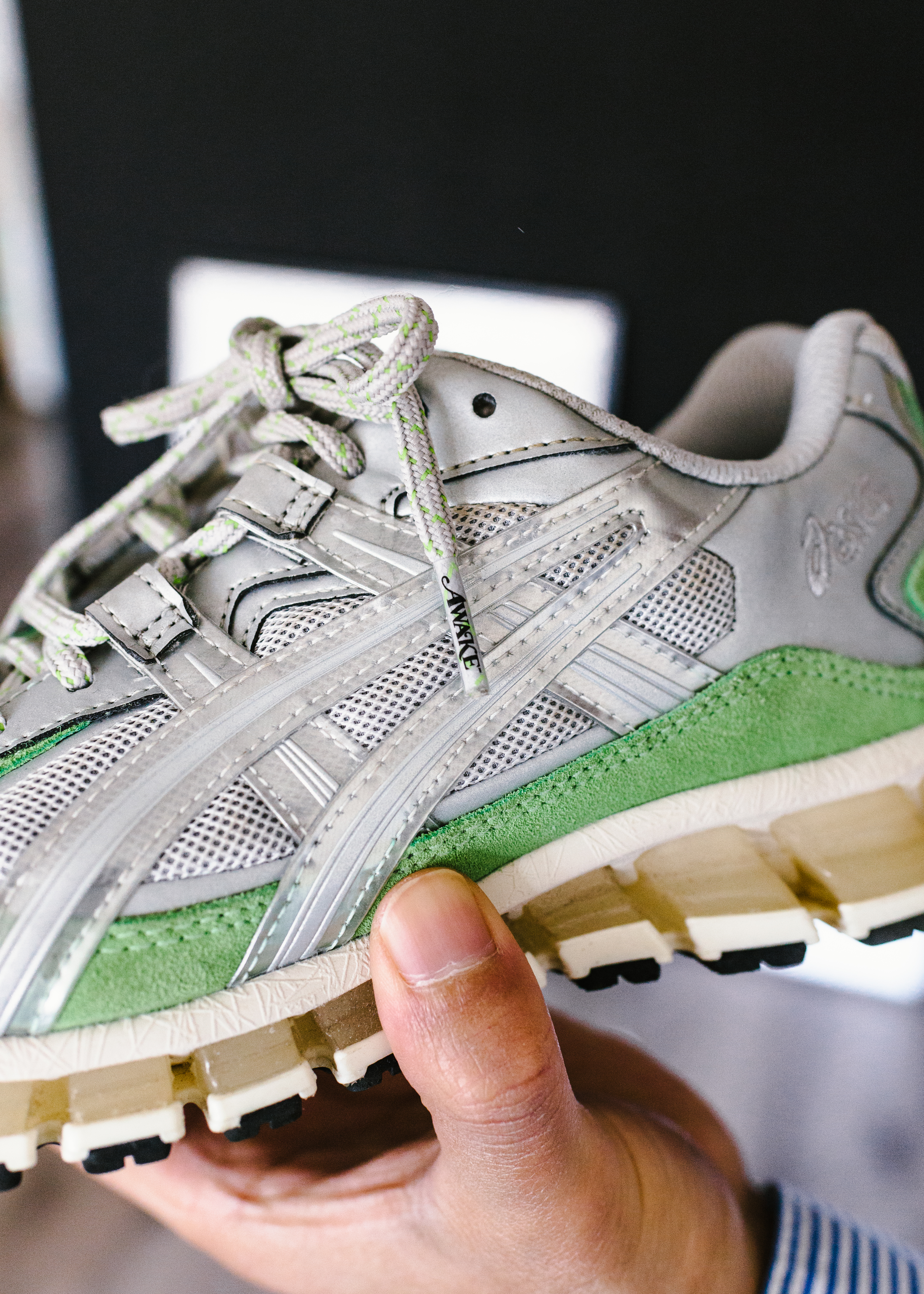 Nike has to be included in this list. When it comes to Air Max 90s, you can have endless debates with every sneakerhead about which year saw the best Air Max 90 Infrared release. Having owned both the 2005 "HOA" ones (which I destroyed within 2 years) and the 2010 release (which I still have), it's the 2005 "HOA" release that has won it for me by a hairs breadth. The main reasons behind this choice are the more vibrant infrared colours and the more comfortable and iconic HOA insole. On the other hand, I'm still happy to have the 2010 release since I'm quite fond of the slightly narrower shape on this one.

Whenever I think about this pair and what it means to me, it takes me way back to the day of the release: In 2010, I was in this collective called SIZED. On the release day of the AM90 Infrared, we had just thrown our first party in The Hague and it was a huge success. To celebrate the success, a good friend of mine who was also part of the SIZED crew, brought up the idea of spontaneously taking a trip to Paris. For some reason, the stars aligned that morning and we could stay at his friends place who wasn't around. And so, we found ourselves in the seats of our car at 6AM, cruisin' down the highway towards the French capital. On the next day, we were walking around the Champs Elysées and decided to check out the Nike Store, just to see if they had anything interesting on the shelves. And as luck would have it, they still had the Infrareds in our sizes! So there you go, bought'em, rocked'em and enjoyed Paris. This story really shows that you should always shoot your shot, who knows what you might end up with! Anyways, this pair of the 2010 AM90 Infrareds is a pair with real memories attached. 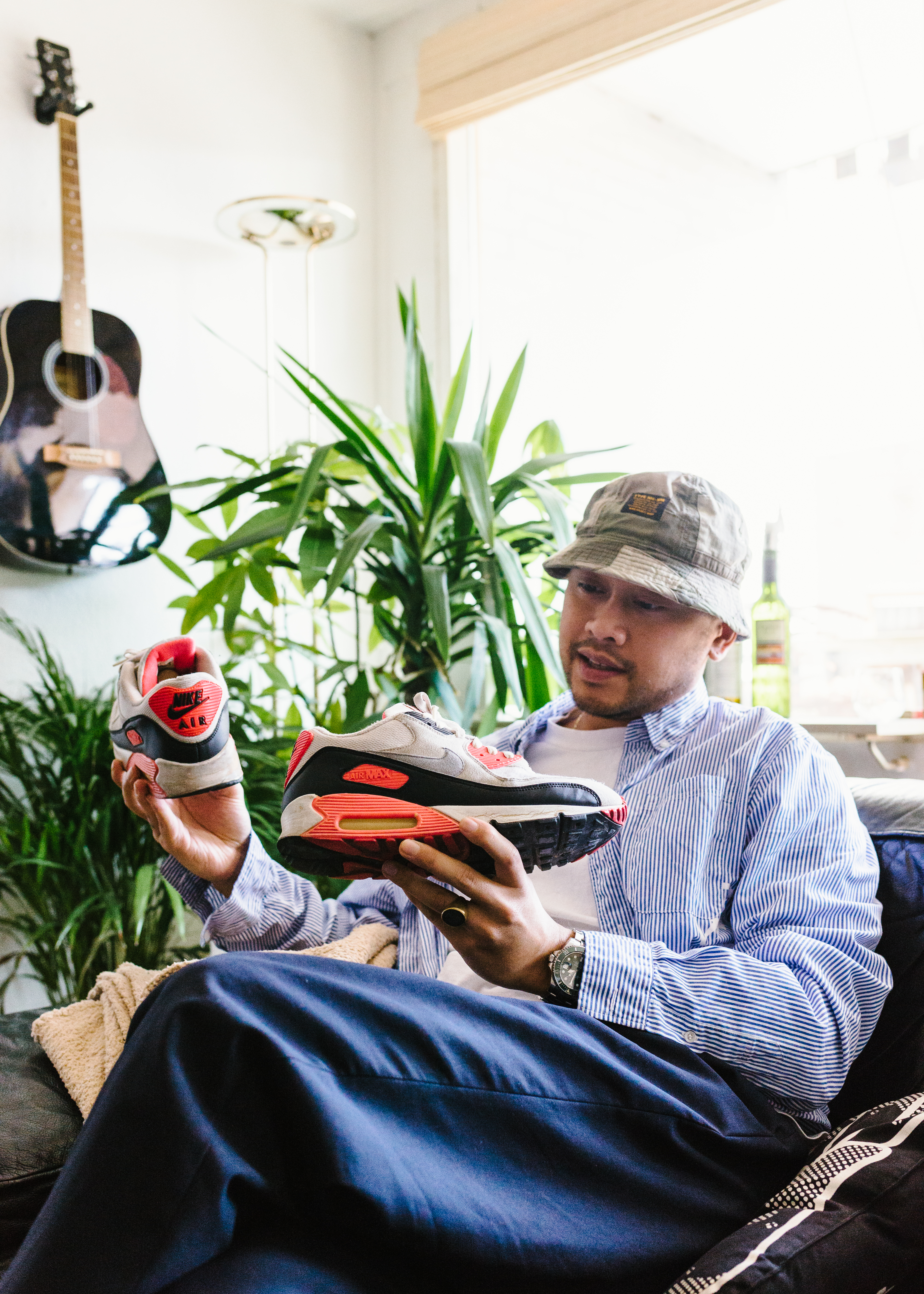 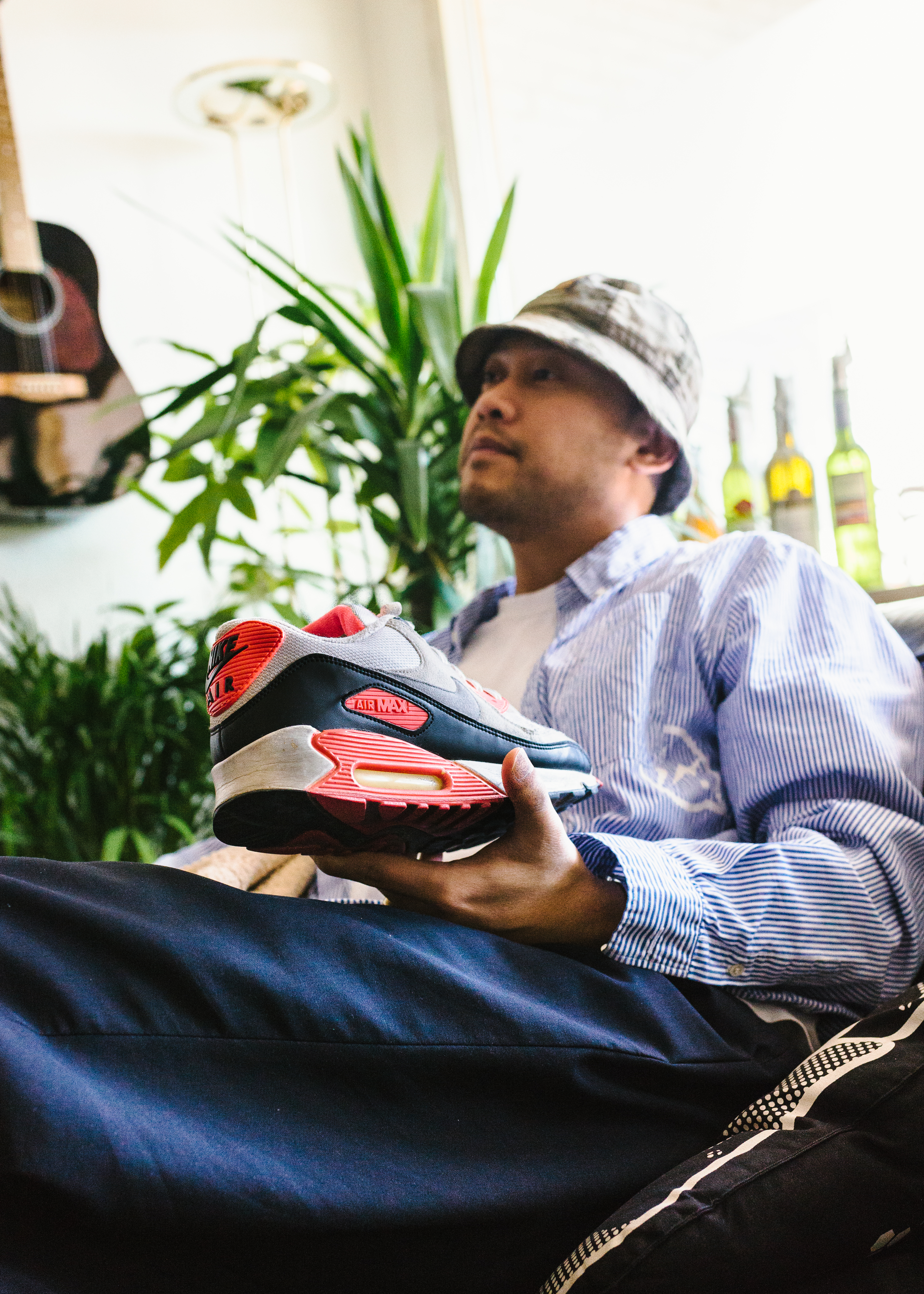 "And so, we found ourselves in the seats of our car at 6AM, cruisin' down the highway towards the French capital.

On the next day, we were walking around the infamous Champs Elysées and decided to check out the Nike Store,

just to see if they had anything interesting on the shelves.

And as luck would have it, they still had the Infrareds in our sizes! So there you go, bought'em, rocked'em and enjoyed Paris." 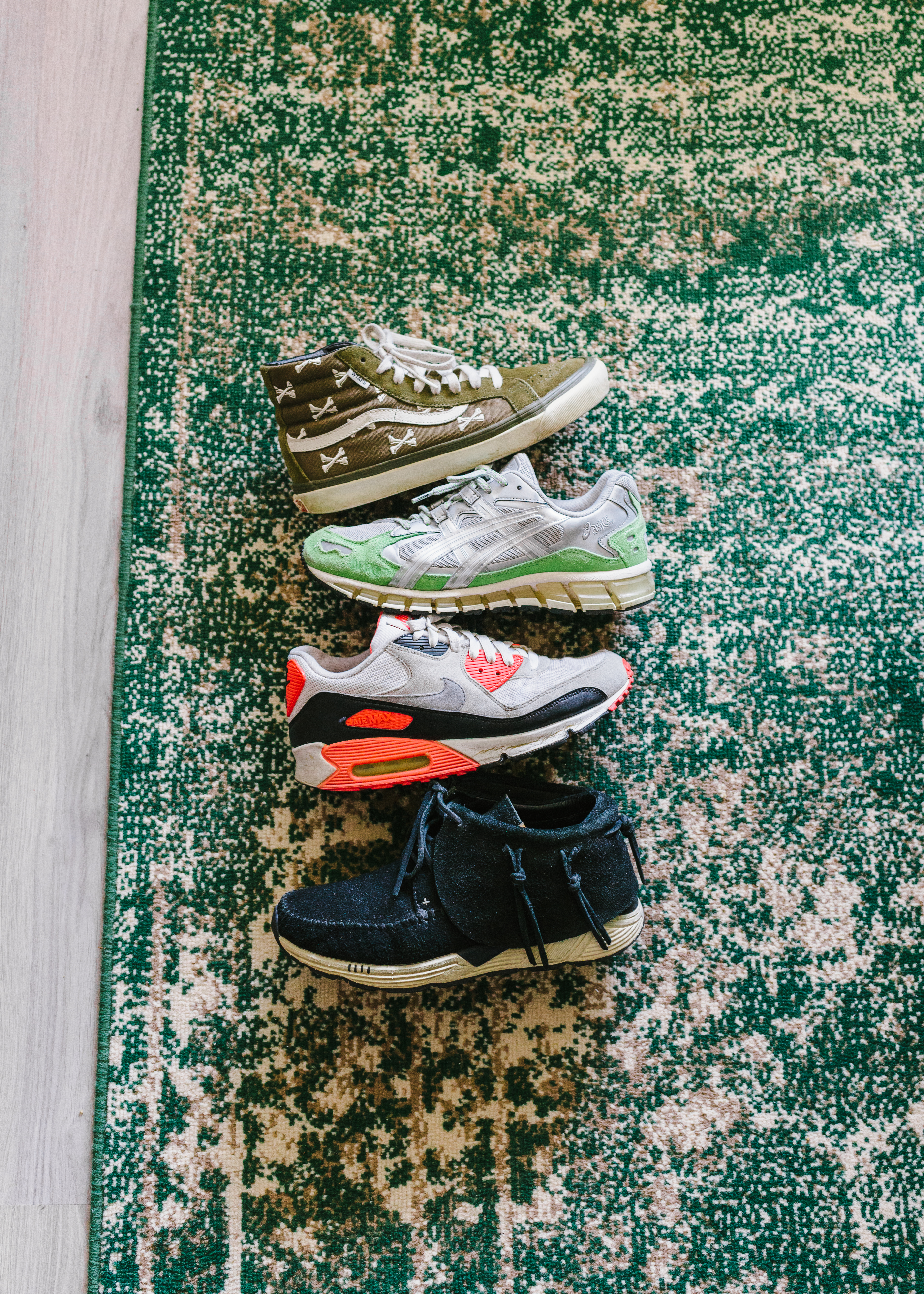 Wanna check out more about Rocco? Head over to his Instagram!

CLICK HERE FOR THE PREVIOUS KICKIN THE DOOR WITH THE ONE AND ONLY DAVID VUNK!