Together with Jacco Bunt we created an ode to our city:

Scroll down to peep the collection and the small interview we did with Jacco Bunt to get to know him a lil'bit better. 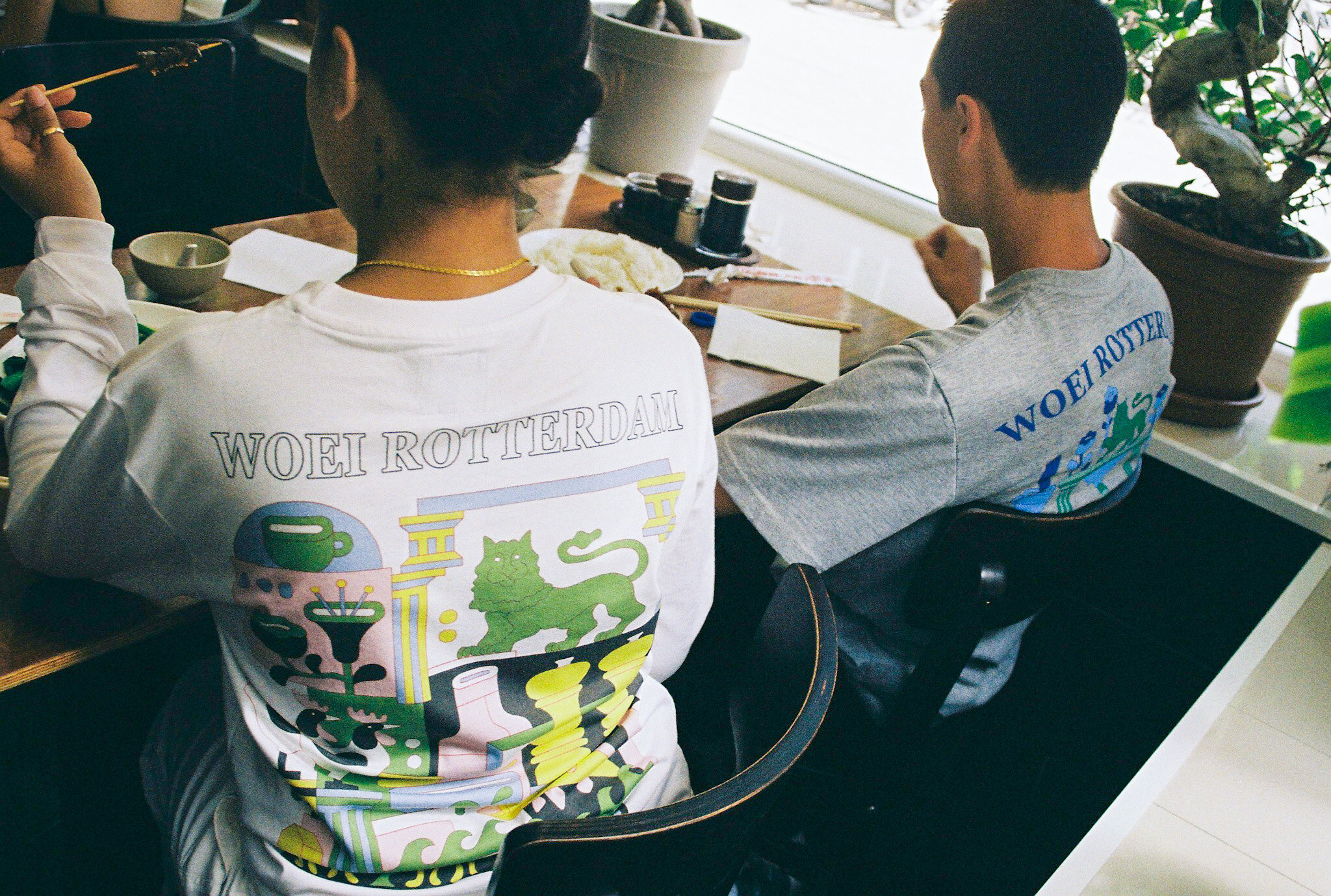 Can you introduce yourself?

My name is Jacco Bunt, I am 32 years old, from Alphen aan de Rijn and live in Berlin these days. I am an Illustrator, and my work is a minimalistic view of reality.

Some of my latest clients include Hermés and Budweiser. I also work with an agency in China that hook me up with commissioned work for brands that aren't as well known here.

Where did you study?

I've entered multiple studies, but illustration at the Willem de Kooning is the only one I finished. 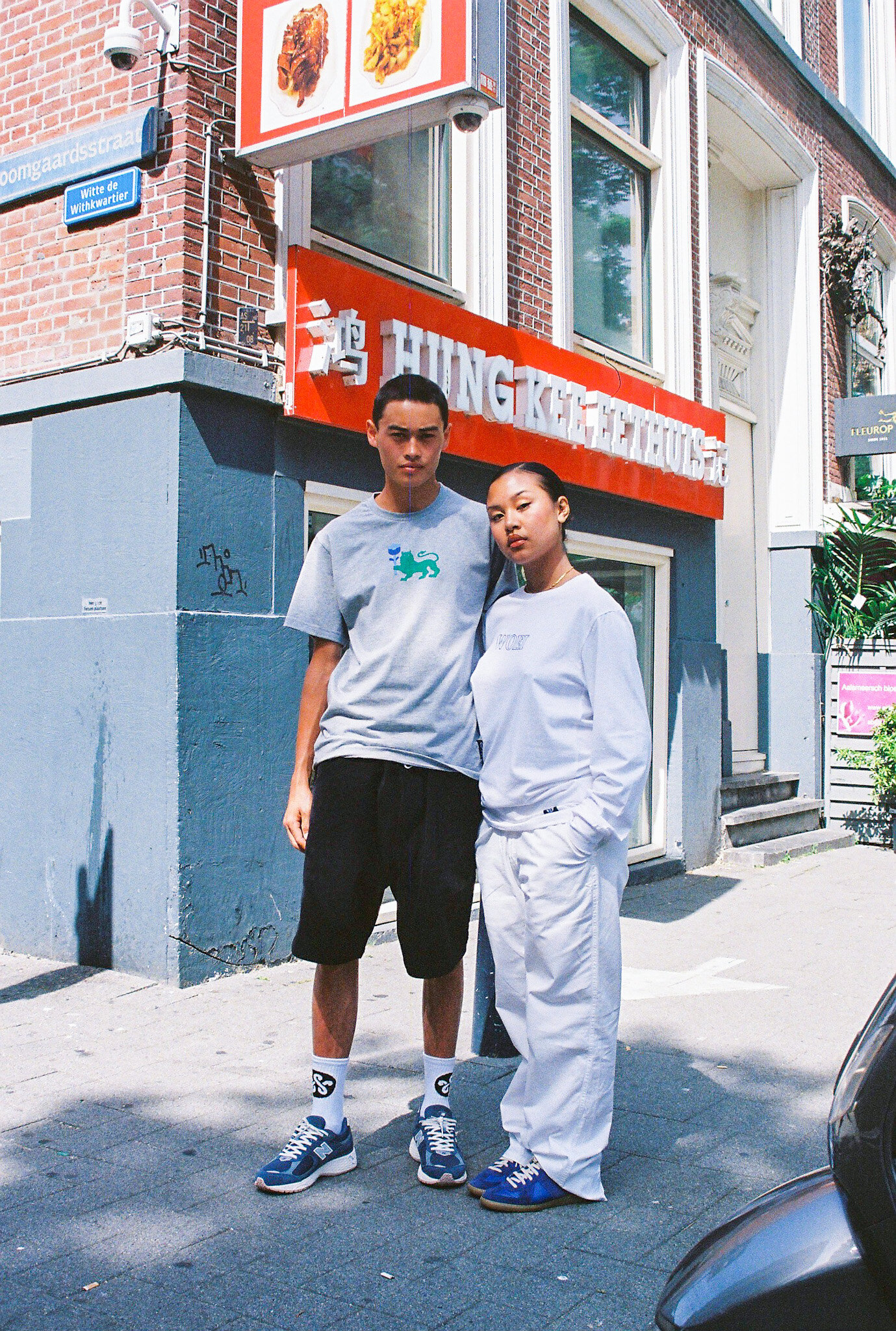 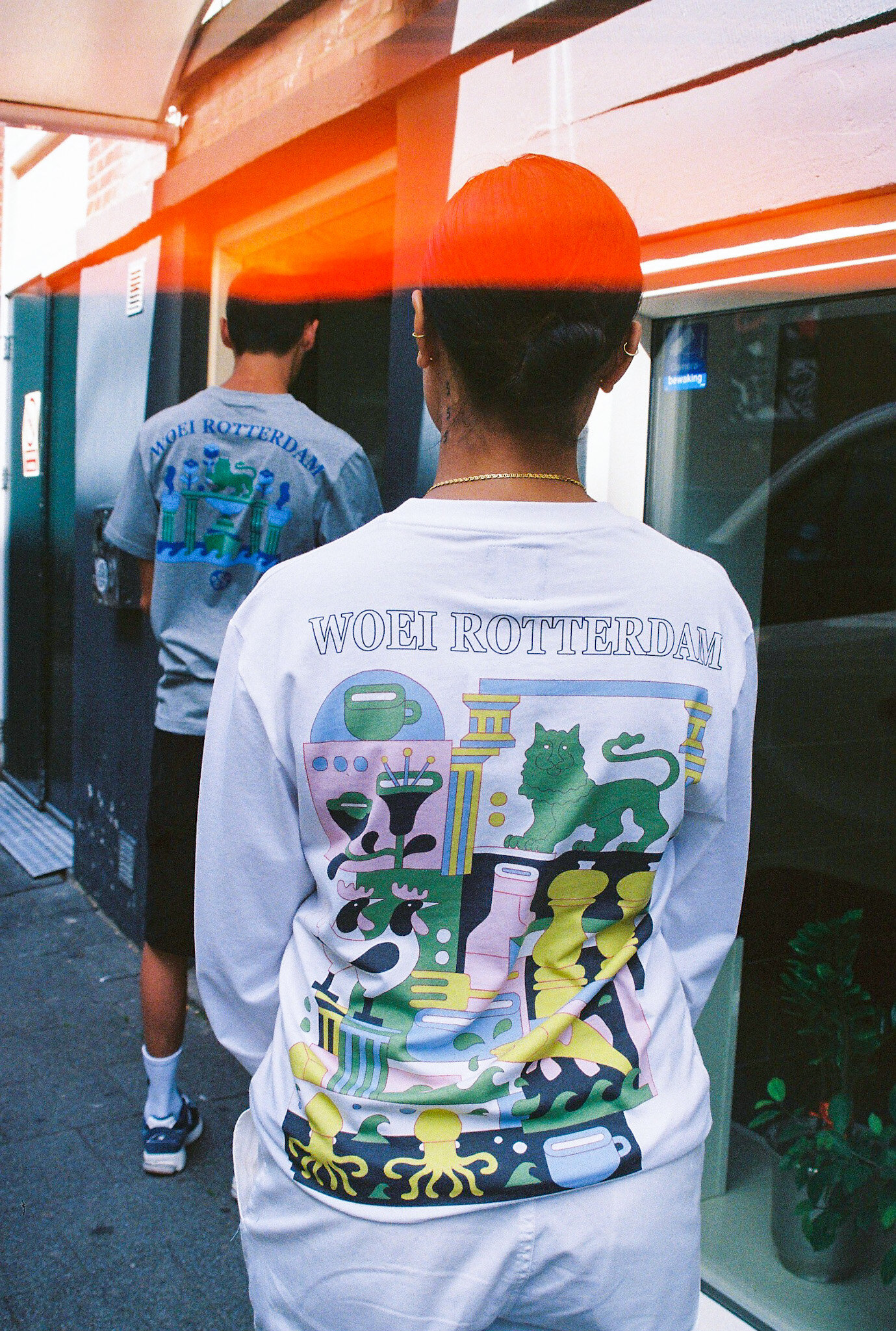 What is your first memory of Rotterdam?

Growing up in Alphen aan de Rijn you didn't have any cool stores to get yourself some nice gear/apparel/sneakers. So me and my friends always went to the big cities like Rotterdam. Here you would be able to get your hands on those crazy Piet Parra T-shirts with heavy graphics and fly sneakers. Once back in the village I grew up in I felt like I was the man with my sick outfits nobody else would have in my surroundings. I was wrong, of course.

But Rotterdam, is in my teenage-memories, a city that provided me with the stuff that I needed to express myself and what I thought what was cool.

What influence did Rotterdam have on you as a person and on your work?

I lived in Rotterdam from when I was 18 until I was 28, so 10 years. I also went to Willem de Kooning, so naturally, Rotterdam became a big part of growing up and getting to know myself.

When I moved to Rotterdam, my parents moved to Zeeland. So in the beginning, Rotterdam felt more like an in-between spot between Alphen aan de Rijn and Zeeland. In my first years in Rotterdam, I'd been switching between those places until I entered Willem de Kooning and got myself an apartment, which introduced me to more like-minded people.

That was the moment a new chapter started in my life. With these people, I eventually started exploring the city more and more. If you decide to move to a new place, it will always have impact on you. Especially if you're young and easily formable.

Moving to Rotterdam and meeting new people and those people showing me around and introducing me to new experiences… I wouldn't say the city itself contributed to the person I am today, but the people who live there definitely did. I didn't get a feel for the 'Rotterdam-mentality' because I was only at art school between the "weird & abstract" teenagers and didn't hang around port workers, so to say.

I think that the people who live in Rotterdam make Rotterdam what it is. 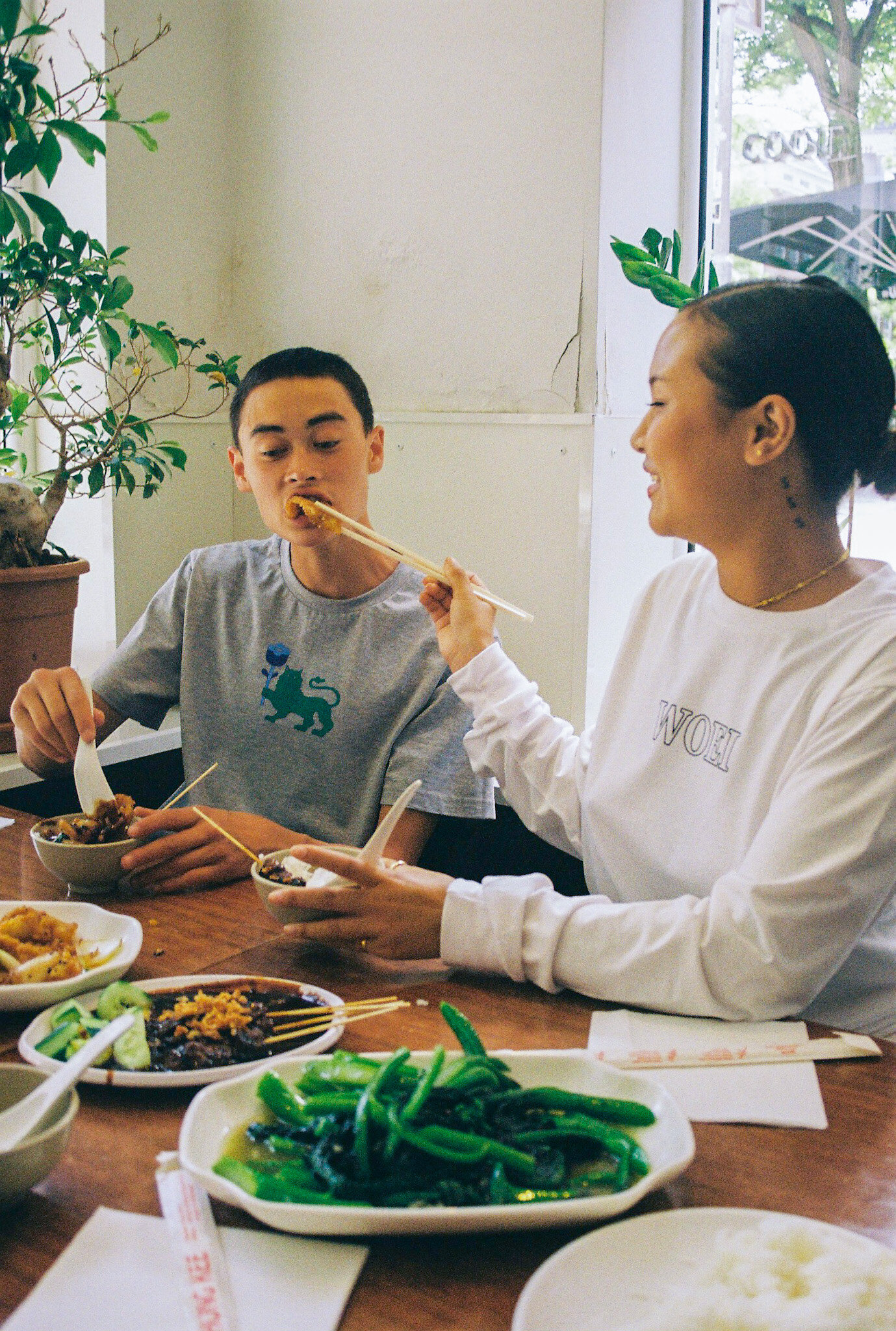 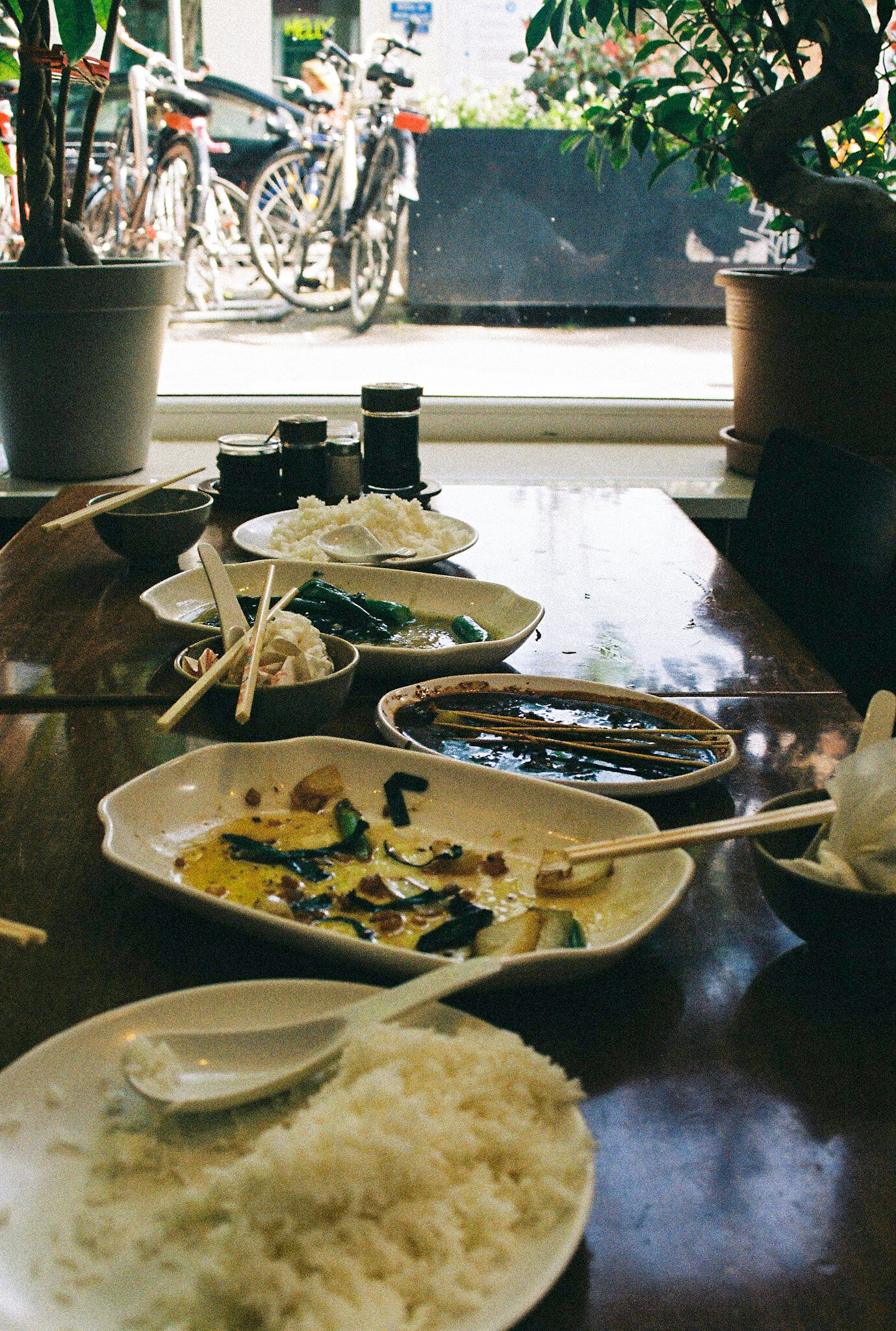 "I think that the people who live in Rotterdam make Rotterdam what it is."

Can you recall certain key moments that influenced your work/style?

At some point, I started comparing myself to my peers, which is normal for a study where the focus lies on output. Early on I recognized that I wasn't at the same skill level as the other students in my class; drawing-wise. That forced me to think of other ways to compensate for that, either drawing or conceptual-wise.

I started researching and came across art movements from the early 1900s. I noticed that artists slightly altered reality, and that composition and colors have the higher role.  Because of this I realized that this is the style that fits me the best. I was lucky that I had that realization early on and started focusing on the minimalistic and abstract direction, which allowed me to develop my skill-set even further. That realization hit in my second year of Willem de Kooning. Even now, I notice that those two things are still my strongest points.

Did your time at Willem de Kooning live up to your expectations?

When I finished high school at 18, I applied to art school without having built up a portfolio. I just made some T-shirts designs here and there. Basically, I thought that whatever Piet Parra was doing, I should do the same thing. But I applied with the weird thought that by getting in and finishing art school, I would suddenly be doing all that, not knowing that the market doesn't work like that.

School gives you the handles. They tell you that drawing, software knowledge, and working with deadlines are key as an Illustrator, but that's about it. They give you a small orientation of the market itself, but the reality after school is so much different than the 'safe bubble' you've been wandering in for those 4 years, where everyone motivates you to keep going. There's none of that, honestly.

I don't think my study shows the students how to position themselves in the already huge, but still growing market. It's up to them to suddenly make themselves stand out above other artists with the same style and the same quality. If you don't already put yourself out there during your studies, it will be over pretty fast, so it's important to already be accepting jobs during your studies. 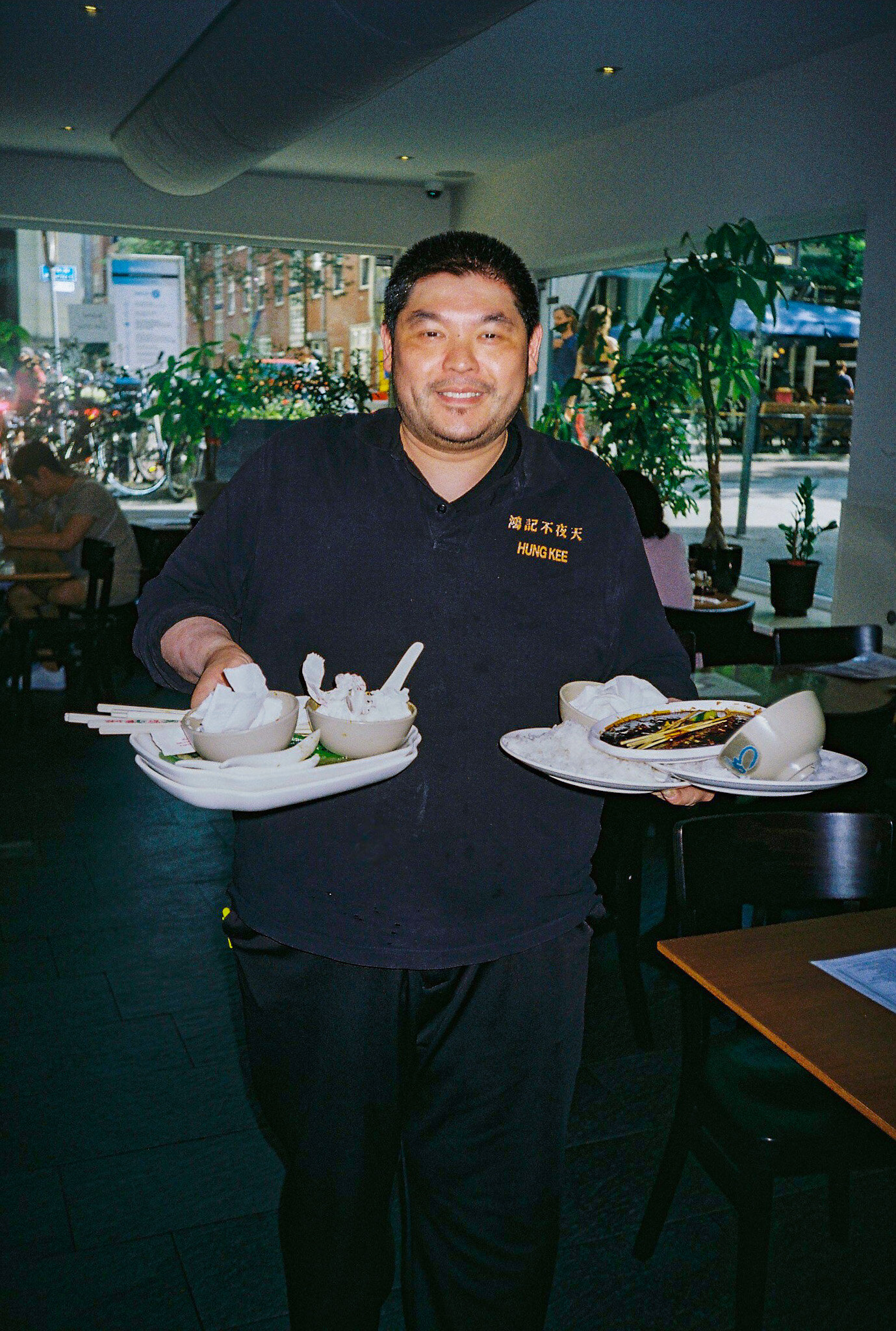 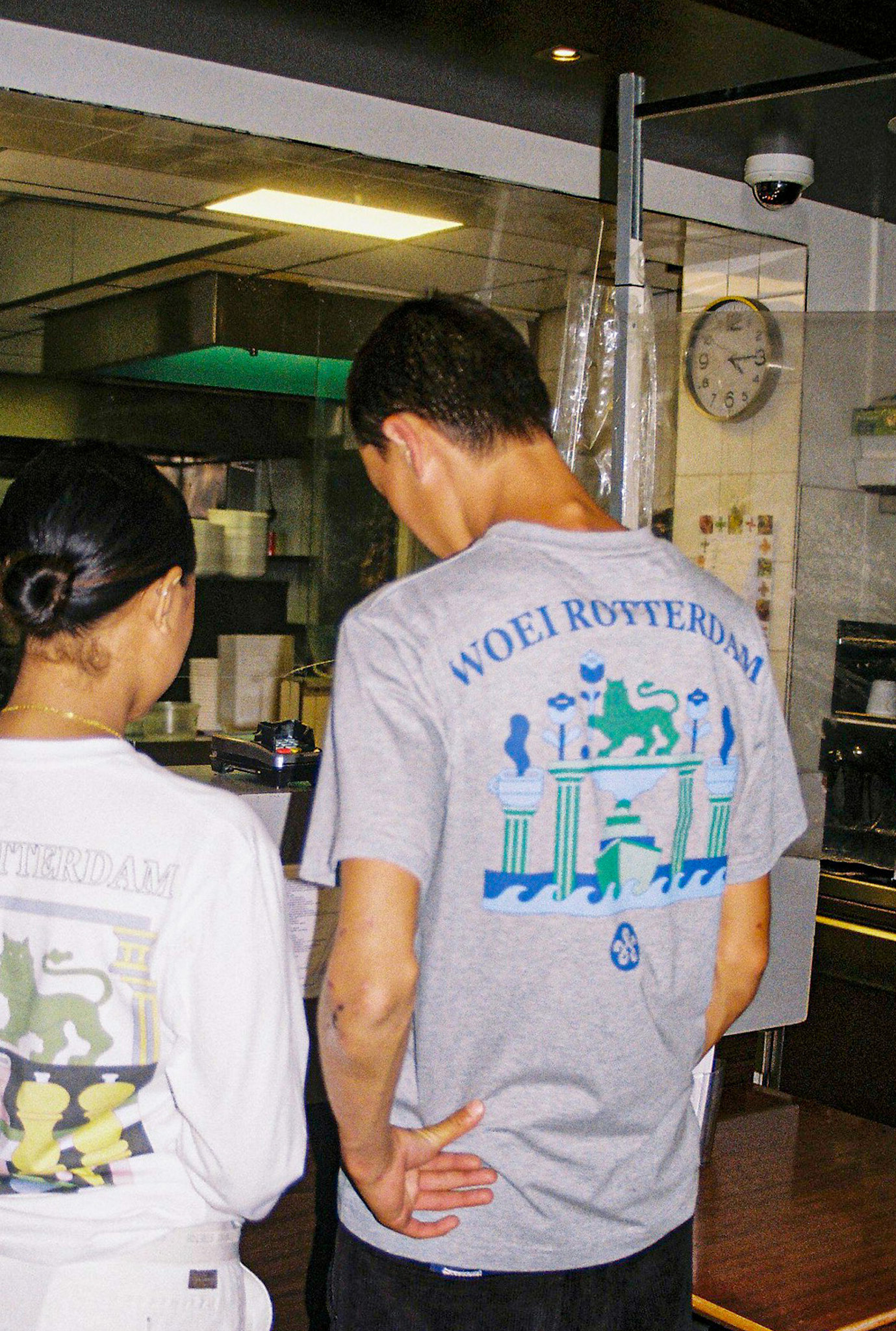 What is your way of working, and how are these works implemented?

I often start by doing research, which I do by looking up references on the internet. That's usually my starting point for new drawings and compositions. On an A4 paper, I work out some compositions, and then pick the best one. I always work with a pencil and a ruler, I see it as making a collage with a pencil. After that; I scan the drawing.

If it's a bigger drawing, I scan it into multiple parts and assemble them in Photoshop. After I scan the drawing I color it in, using Photoshop. That's basically how I've been doing it all this time. Of course, in school, I experimented more with different techniques, but I found that this is my preferred way of working. I also paint sometimes, but not all the time.

Some people think I work with vectors in Illustrator, but if you look at it well enough you can clearly see that it's hand-drawn.

I sometimes get clients that commission me to eventually implement those drawings into multiple products like puzzles, woven rugs, ceramics, etc… but also interactive media like animations and videos. It's interesting to see the different ways that a flat drawing can come alive, in a way.

When making the drawings, I usually don't have to worry about how they'll be able to be implemented into something else other than 2D, because the clients often already have plans for the final product. My only job in these cases is to make the drawings, and I can leave the rest to them.

I like seeing that different clients have different ideas on how to implement my work, which offers me more perspectives on using my work in even more ways.

Can you give us a backstory on the designs for this collection?

Because I don't live in Rotterdam anymore, I decided to create a sort of ode to Rotterdam. Most of the attributes in the drawings tell a little story about my memories there.

Did you use the same technique as you described earlier?

Yeah, I used the same method. As you can see in the designs, I used a clean composition with added attributes that translate to Rotterdam, like the squids, chickens, and salt and pepper moles, which represent the salt and pepper chicken and squid we used to eat a lot.

All those small things together form a small story, which I think is the essence of my work. There's always a meaning behind it, but it's not always clear what it actually means.

Do you have a favorite of the collection?

The Lion Port, it's a strong design. The collection is called 'De Groeten uit Rotterdam', so the danger of making something about this city is that it can turn corny fast.

Any last words for our audience?

This is going to sound cliché, but maybe that fits with Rotterdam: If you work really hard, believe in what you do, and don't give up, you can basically achieve anything you set your mind to. 'Klein beetje geluk'.

The Capsule collection will be available Friday, June 24th instore and online at Woei. 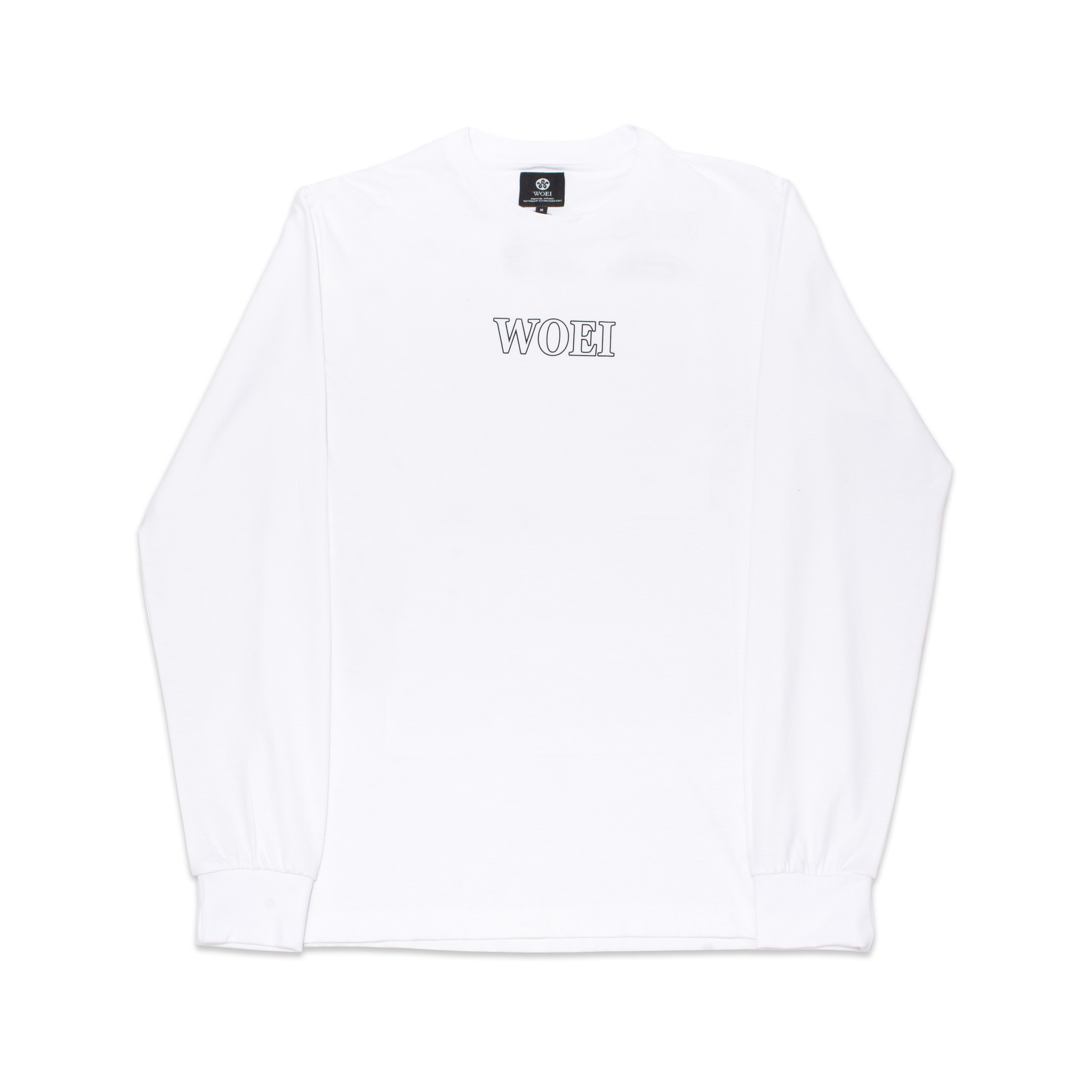 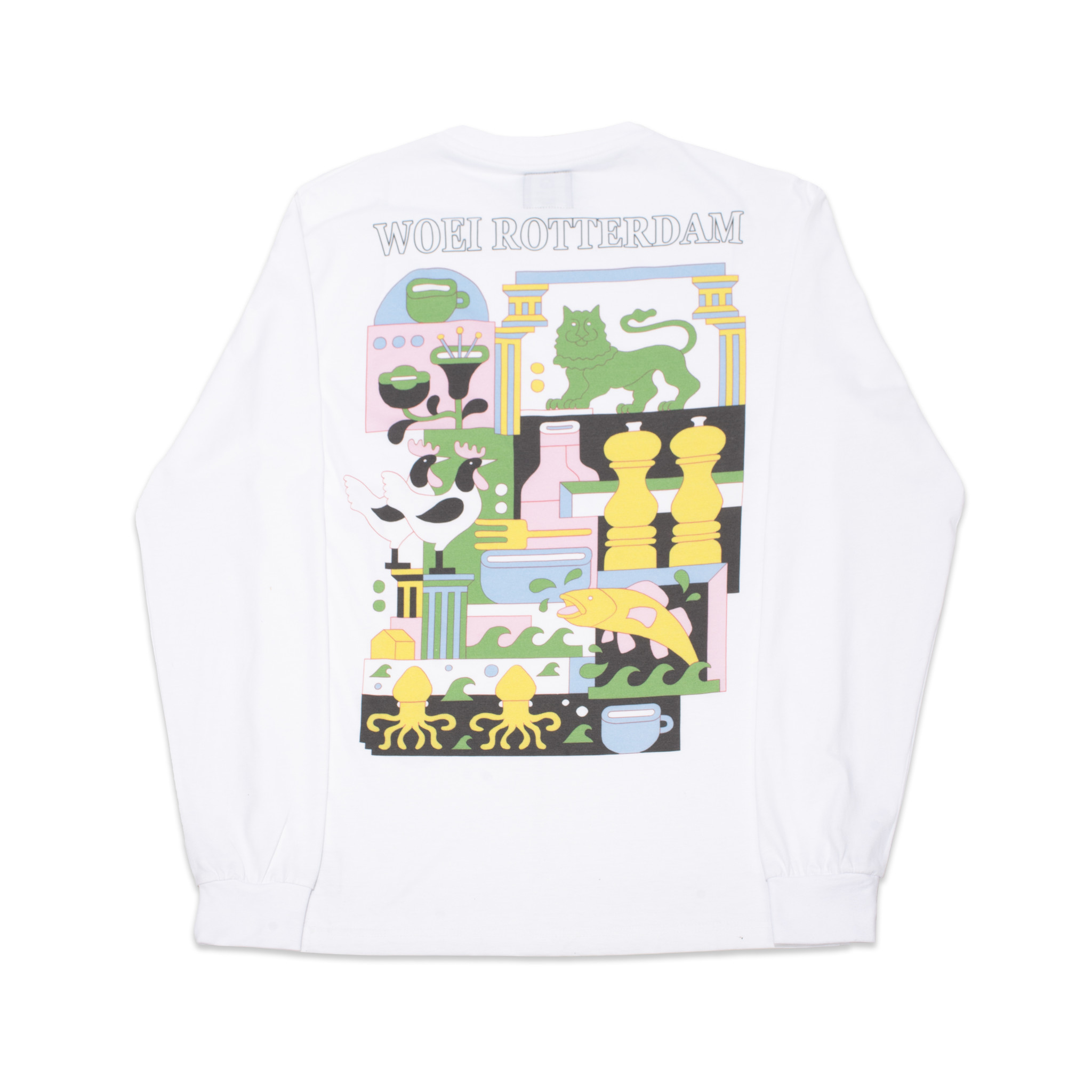 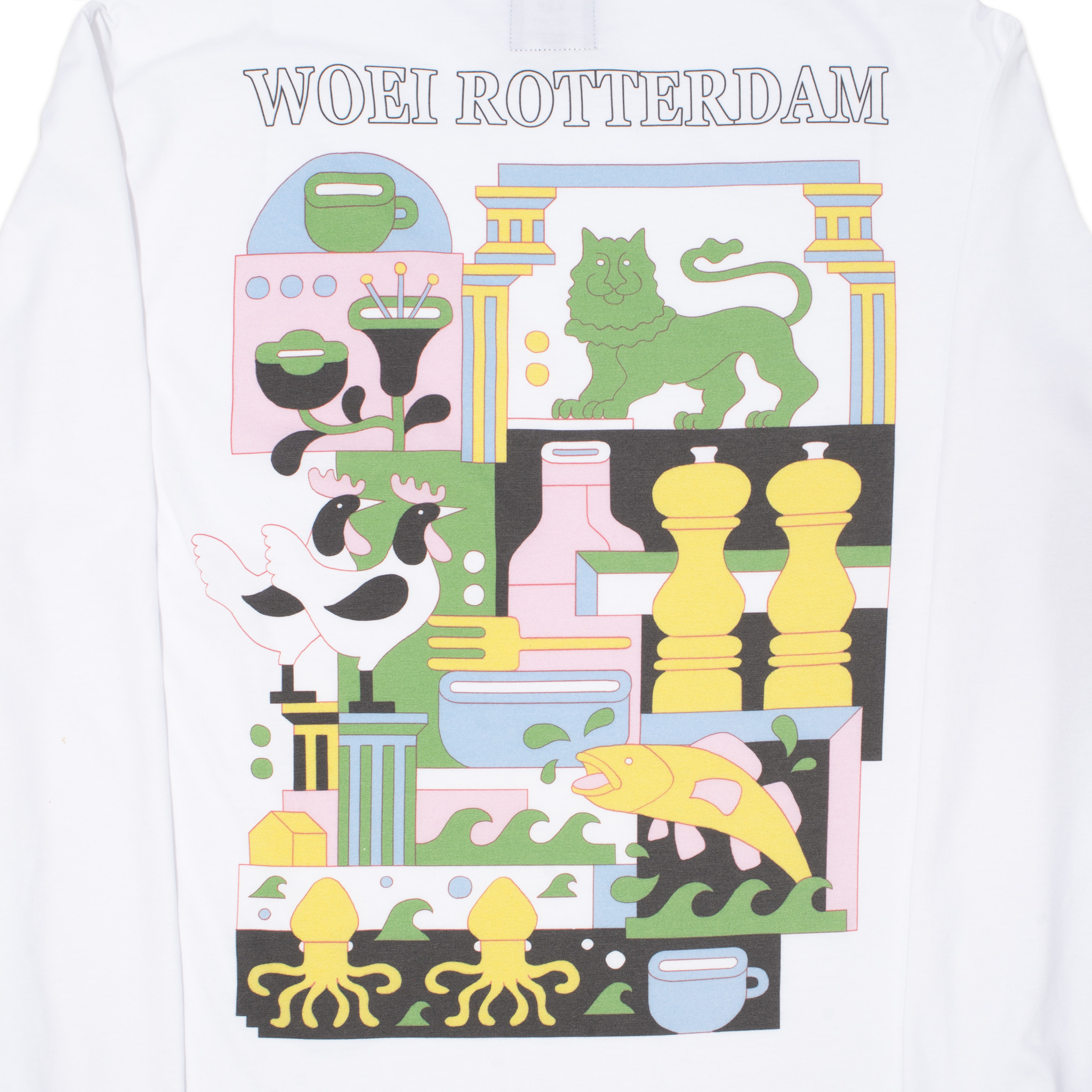 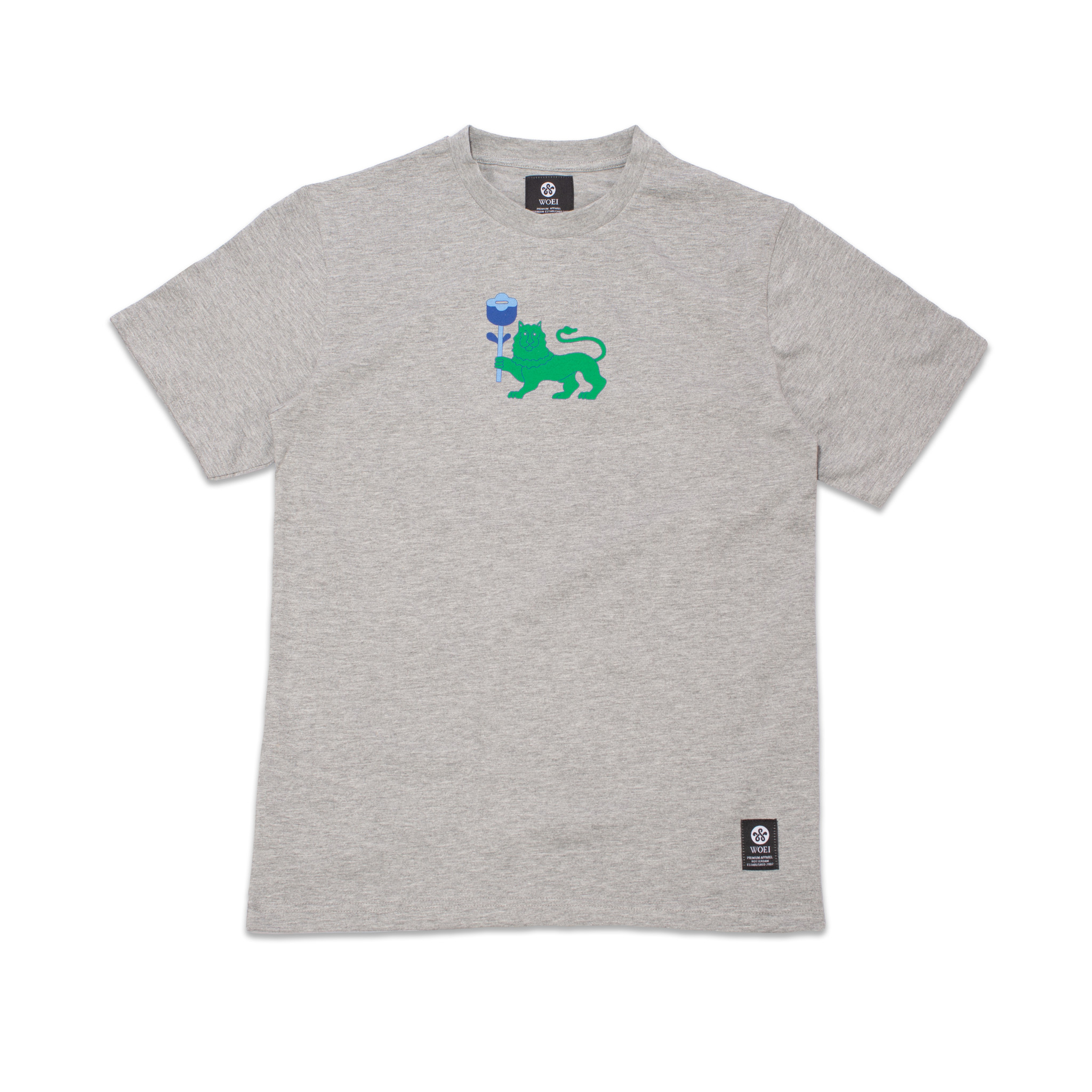 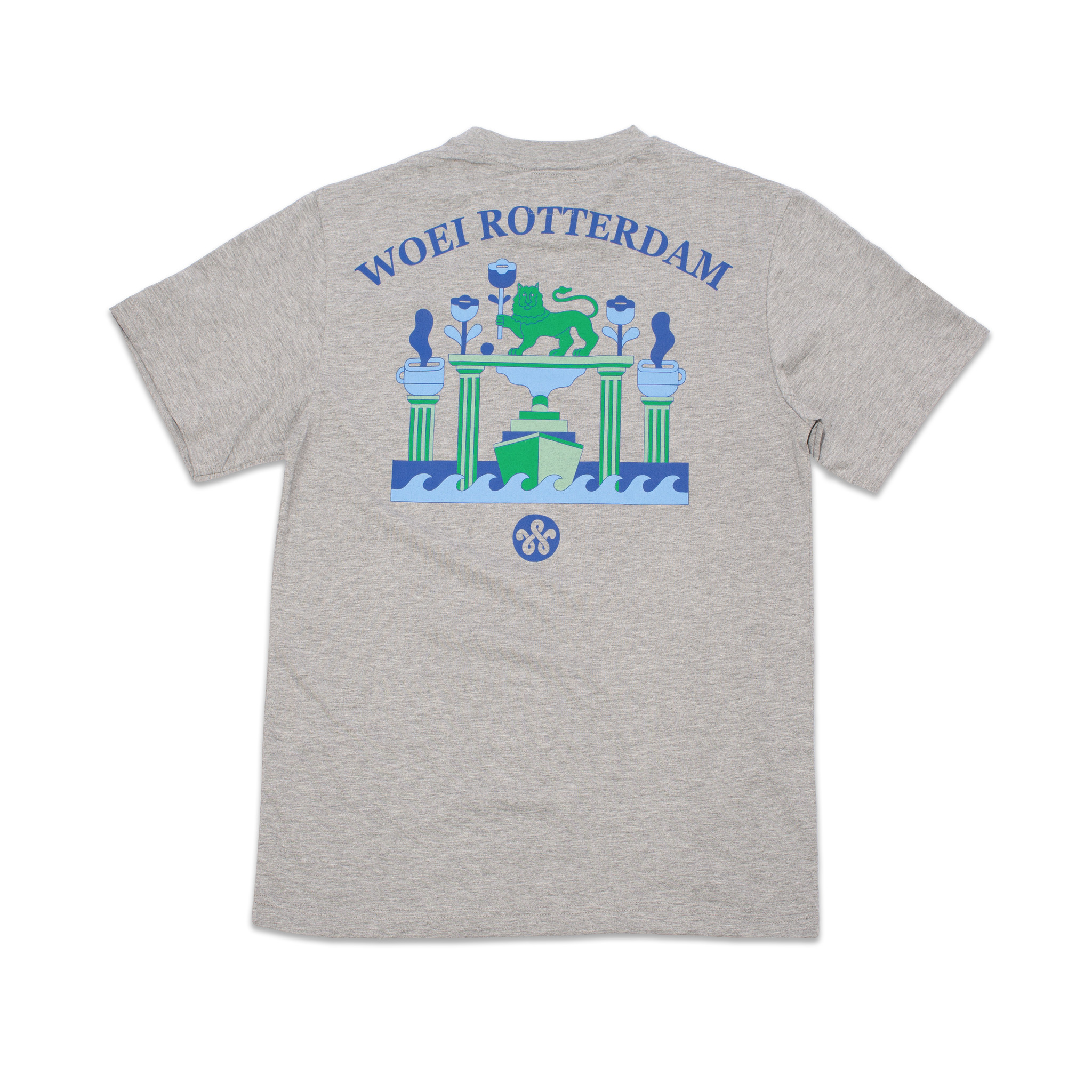 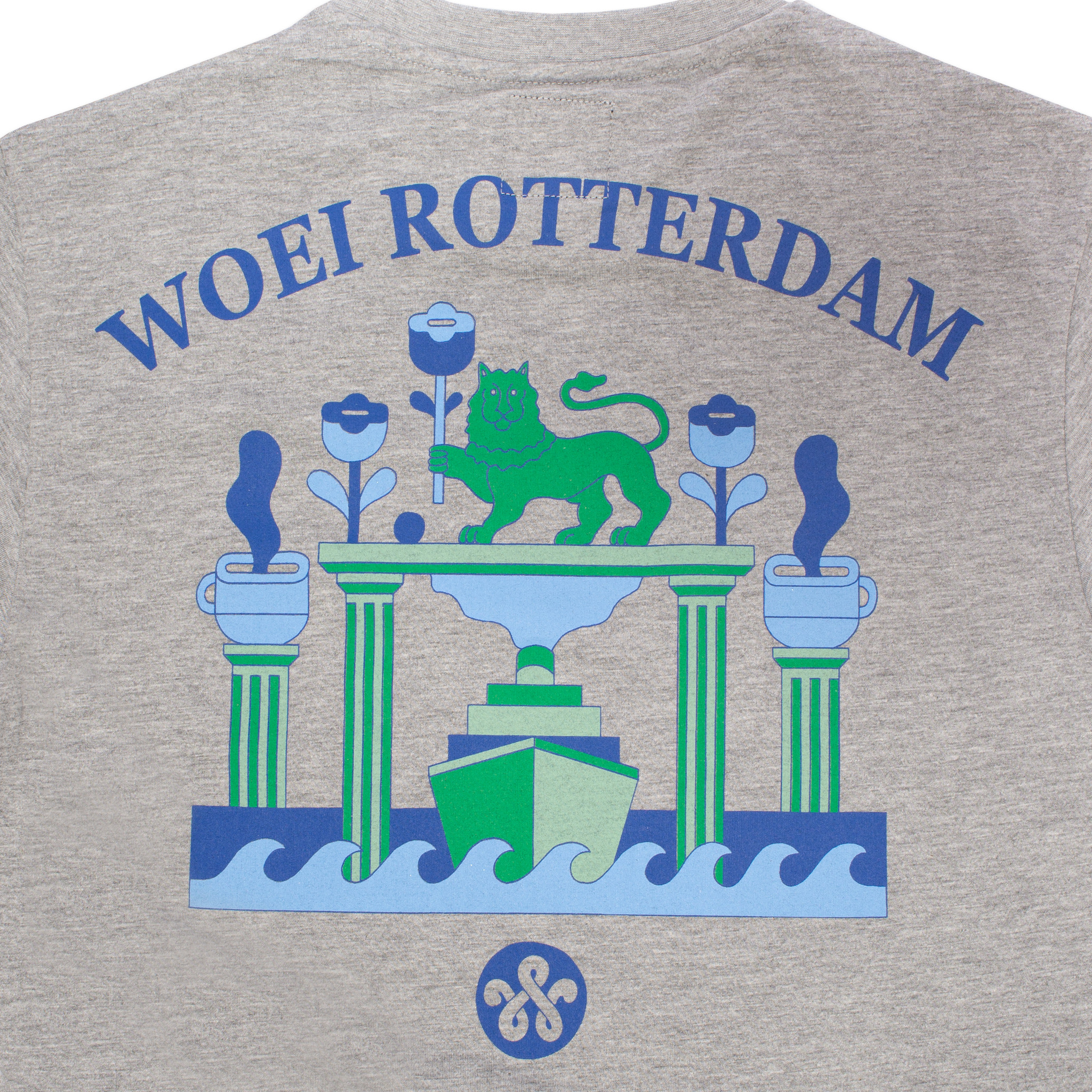